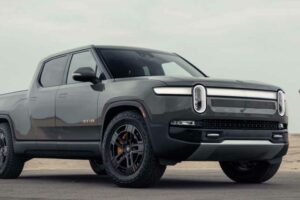 Since we first laid hands on the 2022 Rivian R1T all-electric pickup truck, we’ve proved it can do a lot of things EVs have never done before. We’ve driven it on long road trips, we’ve crossed the country off-road, we’ve hauled people and camping gear, and we’ve towed. One thing we haven’t done yet is put it to work doing traditional truck stuff. A day on the farm was in order.

Thankfully, we have friends at not just a local farm, but the Farm Sanctuary, a nonprofit farm animal rescue organization with locations in southern New York State and just north of Los Angeles. We brought a quartet of midsize pickups out to the California location to volunteer as farm hands back in 2019, and we did a good enough job they let us come back with our shiny new long-term Rivian R1T Launch Edition to see whether it could get the job done.

Going electric certainly jibes with Farm Sanctuary’s mission. Beyond rescuing abused farm animals, the organization advocates for a sustainable food system and part of that is more environmentally friendly farming. Electric farm trucks could be one small part of the larger picture, if they work.

Good news is, they do. The R1T is a tweener in size, bigger than a midsize but not as big as a full-size, like the Ram HDs the Farm Sanctuary currently relies on. With the gear tunnel and tonneau cover storage eating into bed space, it has about as much open-air cargo capacity as a typical midsize truck at roughly 30 cubic feet. Still, it was enough to accommodate seven stacked hay bales with the tailgate open, making for quite a few happy cattle as we spread the feed around. The Rivian’s box-like bed has very little intrusion from the wheelwells, which is a blessing and a curse. There isn’t room in the corners ahead of and behind the wheels like in most trucks, but it also means your cargo doesn’t get caught on the wheelwells when you load and unload the bed.

The R1T’s 1,760 pounds of payload isn’t as good as that of a stripped-out, base-model, rear-drive full size work truck, but it’s on the high end for a midsize with a comparable bed or a moderately equipped four-wheel-drive full-size. The air suspension had zero issue with the 700 pounds of hay, correcting any sag in the rear end caused by the weight without compromising the ride quality meaningfully.

The real advantage in that air suspension, though, is in the ability to lower the truck. Lifting heavy stuff into the bed? Drop the truck to its lowest ride height, and the tailgate sits 31.2 inches off the ground, a good 3 to 4 inches lower than a Ford F-150, Chevrolet Silverado, or Ram 1500. The same trick also saved us a ton of work when we practiced loading the farm’s pigs into a livestock trailer, as they’d have to do in real life to evacuate for a natural disaster. We simply lowered the air suspension, positioned the ball under the trailer’s tongue jack, and lifted the hitch up.

As we’ve found in the past, hooking up a trailer cuts the R1T’s driving range in half the same way it does a gas- or diesel-powered truck, but that’s about the only downside. The R1T doesn’t have a trailer mirror option, so you’ll want to consider buying some aftermarket strap-on trailer mirrors if you plan to do a lot of towing. You can do it with the stock mirrors, but why make life more difficult?

On a farm, you could be towing any manner of equipment around, but if you work with livestock, electric pickups like the R1T offer a few extra benefits. When you’re moving animals, you want to drive as smoothly as possible to avoid injuring them. The R1T’s perfectly linear acceleration is a boon, and a practiced driver can use the strong regenerative braking to slow the truck and trailer smoothly and gently. The truck’s integrated trailer brake works very well and is easily controlled via the multifunction steering-wheel buttons.

The other benefit of using an EV on a farm with livestock is the lack of noise. Many farm animals are used to trucks and tractors and unfazed by them, but others—especially many of the rescued critters at Farm Sanctuary—are quite jumpy. An EV truck rolling up making just its pedestrian warning noise is much quieter and less intimidating than a gas- or diesel-powered truck for skittish animals.

Then there’s the matter of operating costs. Sure, the R1T isn’t the ideal farm truck considering its price, but other EV trucks like the Ford F-150 Lightning Pro will fill that role. Ford estimates all-in operating costs will be 20 percent lower for the Lightning than an F-150 with the 2.7-liter twin-turbo V-6. Fuel is a major cost factor for farmers, and electricity is a lot cheaper than gas or diesel. Give up a bit of field or pasture space for some solar panels, and electricity costs drop even further.

Not that you’ll need to worry too much about the truck’s battery. We charged the R1T to 100 percent at the closest charger to the farm before we arrived, and after a full day it was only down to 75 percent. An especially heavy day of towing and hauling will use more power, but every EV pickup on the market has more than enough juice for a hard day’s work. Plug it in at the end of the day, and you’re good to go for tomorrow.

The one sticking point for Farm Sanctuary is long-haul towing. Occasionally, the organization is contacted by someone hundreds of miles away looking to rehome abused animals, and often the animals need to be taken immediately or they’ll be euthanized. Driving hundreds of miles while towing goes a lot faster with a gas- or diesel-powered truck that can fill up in minutes. The R1T is among the fastest-charging EVs on the market, but it still takes considerably longer, and almost no public charging stations that exist today are set up to accommodate trucks pulling trailers. Still, the organization could conceivably switch nearly all of its vehicles to electric and keep one gas- or diesel-powered truck—maybe even a hybrid truck—for those rescue missions.

There are a few other small issues with using the R1T as a farm truck. The biggest is the location of the full-size spare, stowed in a compartment under the bed. Get a flat, and you have to take everything out of the bed to change the tire. Not ideal when you have a full load.

The other is all the places for dirt, hay, and whatnot to get stuck. The flap that bridges the gap between the bed and the tailgate when the gate is down is good at trapping detritus, as is the Gear Tunnel if you use the tunnel doors as steps to access the bed.

Although a roughly $77,000 lifestyle truck (now more like $96,000 with recent price increases) was never going to be any farmer’s first choice for a work truck, the R1T amply demonstrates that people who use their trucks for work day in and day out can absolutely go electric with very little compromise and more than a few benefits.