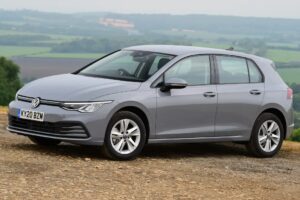 A full used buyer’s guide on the Volkswagen Golf, covering the Golf Mk8 that has been on sale since 2020

For so many car buyers, it’s amazing how often the answer to the question is “the Volkswagen Golf”. There are so many reasons why this is one of our favourite family cars you can buy, at any price, and as a used purchase the Golf makes just as much sense. The ready availability, the wide model range, the excellent engines and transmissions, plus the ease of ownership, all make the Golf a tempting used buy. However, it’s clear that a lot of owners are less enamoured with their Golfs, with a disappointing result in our Driver Power new car survey.

A series of last places is worrying, but what’s really disappointing is the fact that several cheaper alternatives scored rather better; small family hatchbacks such as the Kia Ceed, SEAT Leon and Hyundai Ioniq, as well as the Toyota Corolla and Skoda Octavia. Many of the problems centre on unreliable software which plagued early Golf Mk8s, but if you buy one with the latest updates you should be okay. However, some owners are unimpressed with other aspects of Golf ownership, so before buying one be sure to check out some of the alternatives, which may serve you better.

If you had to come up with a list of the world’s most conservative car makers the chances are that Volkswagen would be on there. But while its cars are evolutionary rather than revolutionary, the fact that most of them are very easy to recommend – and also that buyers clamour for them – suggests that this German company knows what it’s doing.

When the original Volkswagen Golf arrived in 1974, this small family hatchback was seen as a high-quality alternative to cheaper rivals, but few could have foreseen just what an institution – and a brilliant all-rounder – it would become. The Golf Mk8 typifies Volkswagen’s approach, because in many ways it’s merely an evolution of the Mk7 that came before, but features enough new tech and design advances to mark it out as something new.

The Golf Mk8 went on sale in the UK in February 2020, having been unveiled the previous October. At launch there was just a 1.5 TSI petrol engine (with 128bhp or 148bhp) along with a 2.0 TDI diesel with 114bhp or 148bhp. Whereas the petrol engine came only with a six-speed manual gearbox, the diesel was offered solely in seven-speed DSG auto form.

Throughout 2020 Volkswagen released one new Golf variant after another. First was the arrival of the 148bhp 1.5 eTSI mild hybrid in March. Then, in May, a new entry-level model was added: the 109bhp 1.0 TSI, alongside the 109bhp mild-hybrid 1.0 eTSI. For those wanting more performance, the GTi and plug-in hybrid GTE reached showrooms in September, both with 242bhp.

The 197bhp diesel-engined GTD arrived a month later, then in November came the new Golf Estate, which was also available in Alltrack form, with a 2.0 TDI engine and standard 4Motion four-wheel drive. Volkswagen rounded off the year with two hotter Golfs: the 296bhp GTi Clubsport and the 315bhp Golf R.

In April 2021 the 201bhp Golf eHybrid went on sale, powered by a 1.4 TSI petrol engine and an electric motor fed by a 13kWh battery pack; this was effectively a detuned Golf GTE.

You can’t really go wrong when choosing a Golf, because all of the engines and transmissions are user-friendly and even the entry-level cars are well equipped. If your priority is low running costs any of the petrol engines will do nicely if you don’t cover a big mileage; if you do, the diesels are possibly the way to go.

We wouldn’t steer you away from a plug-in hybrid, but the high up-front costs of buying one won’t be rewarded with low running costs if you undertake the wrong type of journeys. Lots of high-speed long-distance motorway journeys will result in disappointing fuel economy figures, but if you mainly undertake shorter or low-speed trips you’ll find that you can drive largely on electricity, which will help to cut your fuel bills.

Alternatives to the Volkswagen Golf Mk8

Three of the most appealing Golf rivals are all German: the Audi A3, the BMW 1 Series and the Mercedes A-Class.

The A3 shares much with the Golf and it’s even plusher, with impressive ergonomics, build quality and cutting-edge technology throughout. The BMW shares all of the Audi’s traits and both cars also come with some really efficient engines and transmissions. The A-Class, meanwhile, is far more mainstream than it used to be and although the rear seats are cramped, the build quality is superb and so is the infotainment.

The SEAT Leon is also closely related to the Golf. It’s cheaper and its cabin isn’t as plush, but the Leon looks the part, is well made and it also features some excellent engines and gearboxes.

A less obvious rival is the Mazda 3 which comes in saloon and hatchback forms, but there’s no estate. Great to drive and cheap to run, the Mazda also looks smart and has an upmarket interior.

Don’t dismiss the Ford Focus which is plentiful and offers strong value; the same goes for the Kia Ceed, Hyundai i30 and Vauxhall Astra, plus the Peugeot 308. None of these will impress you if you’re a badge snob, but all of them offer decent value for money and there are plenty of them to choose from on the second-hand market.

The most common complaint among owners, by far, is software errors. Some owners have had running problems, with the engine cutting out, while others have had safety system warnings flash up for no reason, phone pairing issues and keyless go glitches. Minor updates can be done over the air; major updates require a visit to the dealer.

All Golfs came with a tyre mobility kit instead of a spare wheel. Volkswagen offered a steel space saver spare wheel though, for just £100; this included the jack and tool kit. However, the wheel wasn’t compatible with hybrid models, nor the GTi or Golf R.

The Golf came with a three-year/60,000-mile warranty when new. The first two years of this were covered by Volkswagen and there was no mileage restriction; the third year was covered by the dealer and was subject to a 60,000-mile cap.

Volkswagen claimed that the Golf eHybrid was good for up to 250mpg or so, but unless most of your miles are in electric mode, you can realistically expect to get about 50mpg. However, if you do mainly low-speed short trips, it’s very easy to get more than 100mpg, although you need to take charging costs into account too.

The Golf Mk8 might look similar to its predecessor on the outside, but on the inside it looks a lot more modern thanks to the adoption of a digital dashboard and a 10.25-inch touch-screen display. However, while it looks modern, the user interface for the infotainment isn’t as slick as the class best, so making adjustments on the move isn’t as straightforward as it should be. Another disappointment is the quality of the materials, which in places isn’t quite what you’d expect, although the overall quality is still good.

Because the Golf Mk8 is based on the same platform as its predecessor, there’s no extra rear seat space. That’s not a problem though, because there’s plenty of head and legroom for adults, while there’s also ample front seat adjustment, so it’s easy to get comfortable even if you’re unusually short or tall. Boot space is also pretty average, at 381 litres with the back seats in place, but if you fold them down this jumps to 1,237 litres.

As with all Volkswagens, Golf owners can choose between Fixed and Flexible maintenance regimes. Whereas the former means a visit to the garage is due every 12 months or 9,300 miles, the latter increases this to up to every two years or 18,600 miles. With the Fixed option, services alternate between Oil Change and Inspection, which are priced at £150 and £205 respectively; the Flexible scheme means these are both due every other year, so you don’t save any money but it means fewer visits to the workshop.

Once a Golf has reached its third birthday it’s eligible for discounted servicing, with Minor and Major services alternating at £184 and £354 respectively. Three years is also the point at which the first brake fluid change is due (at £69); it then needs to be replaced every two years. All engines have a cambelt. Unusually there’s no set interval for replacement but Volkswagen UK recommends a fresh belt is fitted every five years, at a cost of £494.

The facelifted Golf Mk7, known as the Mk7.5, has been recalled five times so far by Volkswagen, but the Golf Mk8 has yet to be recalled for anything, which is encouraging. The problems that have cropped up for the Golf Mk7.5 include poorly made rear wheel hubs, incorrect brake discs fitted on the production line, unsecure front head restraints and poorly made rear head restraint mountings. The most recent recall was issued in June 2020 because of glitches with the e-call system, but so far the Golf Mk8 has a clean bill of health. To be certain that any Volkswagen you’re considering buying isn’t the subject of any outstanding recalls, you can put the car’s VIN into VW’s online checker.

The Golf Mk8 made its Driver Power debut in our 2021 new car survey, in a hugely disappointing 73rd place. We would have hoped for a much better result from a car that’s so popular with new and used buyers, and which has such a reputation for being such a talented all-rounder. Out of the 75 entries in the survey, the Golf came last for value, its infotainment systems, driving pleasure, its safety systems and the user-friendliness of its dashboard layout. Some of those things are surprising, but what’s just as disappointing is the fact that the Golf’s highest score was 45th (for running costs), while hardly any areas were rated above 65th. For a semi-premium family car that’s rather worrying.