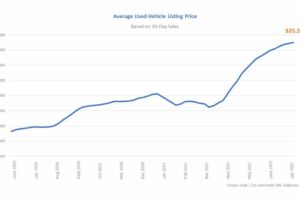 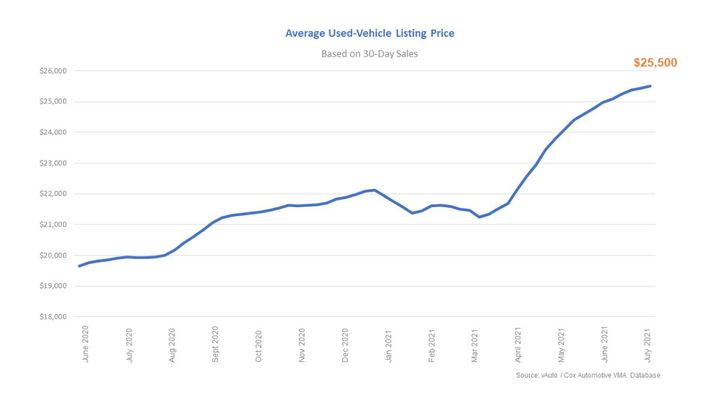 The average listing price for used vehicles set another record in July as vehicle inventory remained tight, according to the Cox Automotive analysis of vAuto Available Inventory data. The days’ supply of vehicles inched higher, but only because sales slowed.

The total supply of unsold used vehicles on dealer lots across the U.S. grew to 2.44 million vehicles at the end of July, compared with 2.40 million the month earlier. Used vehicle inventory improved from the same period in 2020 by 12% but was still down 14% from the comparable time in 2019.

“For consumers, finding a used vehicle at an attractive price represents a huge challenge in today’s market,” said Charlie Chesbrough, Cox Automotive senior economist. “Sales have been slowly falling in recent months due to limited availability and high prices, but not enough to chase off prospective buyers. The even more pronounced lack of new vehicles is forcing shoppers into the used market, and so even more buyers are chasing fewer vehicles. The situation is unlikely to improve significantly until the supply issues in the new market start to improve.”

The Cox Automotive days’ supply is based on the daily sales rate for the most recent 30-day period, which ended July 26. Used-vehicle sales in that period totaled 1.77 million units. Used-vehicle sales were about 8% lower this July than July 2020, but were roughly flat with July 2019.