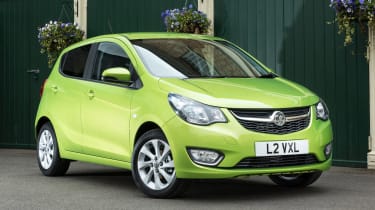 City cars must be cheap to buy, but safety and emissions regulations mean manufacturing costs are becoming too high relative to what consumers are prepared to pay. As a result we’ll see less choice available in the class, with the Viva already having been axed. That’s a shame, because while the titchy hatch is no class leader, it’s likeable enough, with its roomy cabin, long list of standard kit and the convenience of Vauxhall’s big dealer network. The interior design is less inspiring, as is the driving experience, but low buying and running costs are key to its appeal.

Although Vauxhall started out as a luxury car maker, ever since its acquisition by General Motors in 1925 the marque has focused on building affordable cars for the masses. Nowhere is this more apparent than with the Vauxhall Viva city car, which took its name from a series of family saloons, coupés and estates that were introduced throughout the sixties and seventies.

But while most retro-inspired 21st century cars, such as the Fiat 500, BMW MINI and Volkswagen Beetle, share some styling cues with their identically named forebears, the Viva doesn’t. As a result the pint-sized Vauxhall doesn’t have their charm, but that doesn’t mean it’s entirely devoid of appeal. In typical Vauxhall fashion the Viva majors on value and practicality, so you buy one with your head rather than your heart. 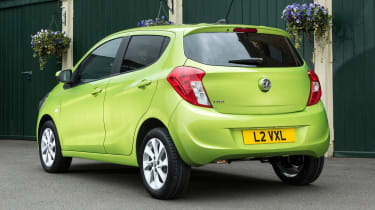 The first Vivas reached showrooms in June 2015, with only a 74bhp 1.0-litre three-cylinder petrol engine available. All models came with five doors and a five-speed manual gearbox, initially with no auto option. Buyers could choose between SE and SL trims; the former was available in ecoFLEX form, meaning ultra-low-rolling-resistance tyres and extended spoilers front and rear for improved efficiency.

In November 2017 the range was extended with the Viva Rocks, which featured a raised ride height and plastic cladding to give it an off-roader look, although mechanically it was exactly the same as the regular Viva.

Most Vivas have a manual gearbox, but a few Easytronic autos were made. The manual transmission works fine; the Easytronic set-up isn’t so accomplished.

Entry-level SE trim is the most common, with electric front windows, cruise control, electrically adjustable and heated door mirrors, a four-speaker stereo with steering wheel controls, height adjustment for the driver’s seat, a 60:40 split rear seat and lane departure warning. While the SE comes with 15-inch steel wheels, the SL gets 15-inch alloys, along with climate control, Bluetooth, privacy glass and six speakers. 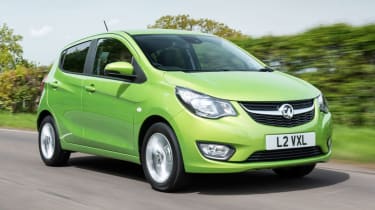 The SE didn’t come with air-con but an SE A/C model was offered. Cars with air-con are obviously worth seeking out, as are versions with some of the few options offered: heated front seats, touchscreen infotainment and an electrically operated glass sunroof.

Alternatives to the Vauxhall Viva

Top of your list should be the SEAT Mii, Skoda Citigo and VW up!, all of which offer strong refinement, excellent build quality and a big-car feel with smart styling; there are also lots of each to choose from.

All these traits also apply to the Kia Picanto, which offers stronger value and a much better (seven years/100,000 miles) warranty. Related to the Kia is Hyundai’s i10, which offers the same characteristics but with a five-year, unlimited-mileage guarantee.

The Citroen C1, Peugeot 108 and Toyota Aygo are all plentiful, cheap to run and modern. Another contender that’s worth a look is the recently axed Ford Ka+, which is almost as big as a Fiesta, so it’s relatively roomy and reasonable value, but its non-turbo 1.2-litre engine is outclassed by rivals’. 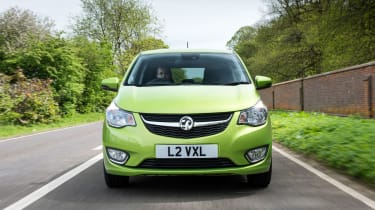 There’s no spare wheel supplied with the Viva. Instead, all cars come with a mobility kit in the boot to get you to a repair centre.

A number of owners have complained that their Vivas use a lot of oil, so be sure to check at regular intervals that the engine isn’t running low.

Within only a year of the Viva’s launch, the ecoFLEX model had been axed by Vauxhall and an Easytronic auto had been added to the range.

We would avoid the Easytronic transmission because it’s not very accomplished. As a result, it wasn’t available on the Viva for long.

There is little to excite in the Viva’s cabin, but it’s easy to use, with a straightforward design, and there’s more room than you might expect, with space for four adults. The fit and finish are fine, yet the materials look cheap in places; the IntelliLink multimedia system (if fitted) really improves things. With the rear seat up, the boot can stow just 206 litres, but it’s a useful 1,013 litres if you fold them. 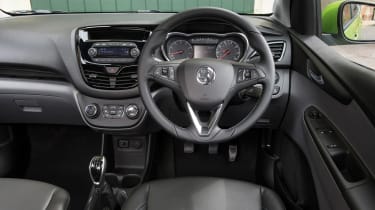 Interim maintenance comprises an oil and filter change, with a check of all fluid levels; the Main service adds a new key fob battery, pollen filter, brake fluid and a headlamp alignment check.

A Major service includes fresh fuel and air filters plus new spark plugs, but no cambelt because the Viva has a timing chain. All Vauxhall dealers offer service plans; you can find full details at www.vauxhall.co.uk.

The Viva has had just one recall, in April 2016, affecting 63 cars built from December 2014 to March 2015. Their driveshafts were made without a suitable protective coating, so the steel shafts could corrode and fracture, leading to a loss of drive, although steering and braking would be maintained. If there was any sign of a problem with corrosion, dealers replaced both driveshafts.

The Viva hasn’t appeared in our new or used Driver Power polls, but 17 owners have left reviews on the Carbuyer website. Nine of these award the full five stars, while the others are spread between one star and four. The most appealing aspects are the roomy cabin, great value, tidy handling and low running costs. Reliability is generally good – but not for all owners, sadly.