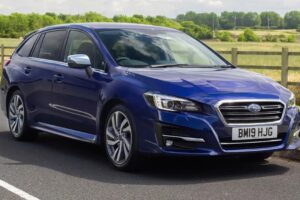 A full used buyer’s guide on the Subaru Levorg, focusing on the Mk1 Levorg that was on sale from 2015 to 2020

There’s a fundamental problem with buying a second-hand Levorg: there aren’t a lot of them available on the market. While the Subaru estate has its good points, they are balanced out by the weaker ones. The Levorg might have been Japan’s Car of the Year in 2020, but we’d be inclined to buy any of the rivals already mentioned, not because the Levorg is a bad car as such, but because its rivals are more rounded. Safety and reliability are the Subaru’s strongest suits, but running costs, performance, cabin quality and availability all count against the Levorg. If you can afford the running costs you’ll find ownership relatively painless, but that also applies to most of its rivals, which should be cheaper to buy and run, too.

Subaru has never been a big player in the UK market, but since it arrived here in the seventies, it has appealed to a select band of people who love its impressive reliability record and standard-fit four-wheel drive.

For a while the Impreza Turbo was a must-have performance car, its reputation bolstered by impressive results in the World Rally Championship. But those days were long gone by the time the Levorg arrived, with Subaru very much a niche brand in the UK.

The firm campaigned the Levorg between 2016 and 2019 in the British Touring Car Championship, with some success, but sales were hard to come by. Does the Subaru deserve a higher profile as a used buy?

We got our first glimpse of the Levorg when it was unveiled in November 2013 in concept form at the Tokyo Motor Show.

At the Geneva Show in March 2015 the production Levorg was shown, with the first customer cars reaching the UK in September 2015, picking up where the Subaru Legacy left off. There was just one model available in this country: the Levorg GT 1.6 DIT Lineartronic, with a 168bhp turbocharged 1.6-litre petrol engine, a continuously variable automatic transmission (CVT) and four-wheel drive as standard. There was no manual-gearbox option.

A refreshed Levorg went on sale in July 2019, with a 147bhp non-turbo 2.0-litre petrol engine, still only offered with a CVT gearbox and four-wheel drive. The grille and bumper were redesigned and LED headlights with a cornering function were now fitted as standard equipment.

The only thing that separates Levorgs is the colour and whether they are pre or post-facelift. The latter have a non-turbo engine that lacks muscle, which is why we’d opt for the earlier turbocharged 1.6-litre engine every time. But these are hard to find.

There were no options offered, but there were a few accessories available, such as a detachable tow bar, premium overmats and a moulded tray for the boot.

Alternatives to the Subaru Levorg

Two of the Levorg’s most capable rivals are the Volkswagen Golf and Skoda Octavia estates, which share the same efficient engines and transmissions. They’re good to drive, user-friendly and well made, and there’s a wide model range for both. The Ford Focus Estate plays the value-for-money card heavily, and its dynamics are excellent.

The Kia Ceed Sportswagon looks smart, is good value and you can expect reliability, too, while the Renault Mégane Sport Tourer is cheap to run and very comfortable.

The BMW 3 Series, Mercedes CLA Shooting Brake and Audi A4 Avant are hi-tech but pricey to buy. Of these several alternatives, remember that even the ones that are unusual are still more plentiful on the used-car market than the Levorg.

The five-year/ 100,000-mile warranty covered everything for three years/60,000 miles, then just the powertrain.

A tyre repair kit was supplied instead of a spare wheel. A full-size spare fits, as does an 18-inch Kia Ceed wheel with a spigot ring.

Levorgs are reliable, but owner forums in the UK report steering racks being replaced by Subaru under warranty because of excess play.

Four-wheel drive gives the Levorg good traction for towing, but the lack of muscle is an issue. The towing limit is 1,500kg for both engines.

We haven’t heard many complaints from Levorg owners and reliability is a strong area for this model, with no recalls having been issued. With this in mind, you shouldn’t need to perform any extra checks when looking at a used Levorg.

Cabin space is fine for four adults, and there’s plenty of oddments space, but the design and materials can’t compete with those of premium rivals. The Levorg’s facia is generally user-friendly, but it looks rather dull and dated.

The boot is roomy, at 522 litres, and if you drop the back seats, this jumps to a very useful 1,446 litres. Incidentally, the 2019 facelift brought a new 40:20:40 folding seat arrangement; before this it was a regular 60:40 set-up. Later Levorgs were fitted with a 5.9-inch infotainment display, which was pleasingly simple to use, thanks to a series of nicely laid-out physical shortcut buttons.

All Levorgs need to be serviced every 12 months or 12,000 miles, whichever comes first, regardless of whether the 1.6-litre or 2.0-litre engine is fitted.

The first maintenance is in effect an oil and filter change, which is priced at a hefty £350; the second service involves replacing the brake fluid, which pushes the total cost up to £410.

Since the Levorg arrived in the UK back in the autumn of 2015, Subaru has issued a total of 15 recalls across its entire model range. However, none of these has affected the Levorg, which is another plus point for this compact estate’s reliability.

Predictably, the Levorg is too niche a car to have appeared in our Driver Power surveys. But even though Subaru doesn’t sell many cars in the UK, it has appeared in our Brands poll. Subaru was third out of 30 manufacturers in our 2020 Brands survey. Owners said their cars were reliable and satisfying to drive. Subaru was voted best for safety features in the poll, with running costs and performance the only downsides.