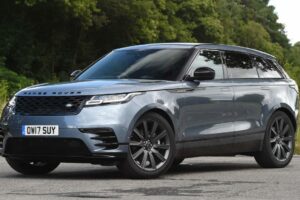 When Land Rover introduced the Range Rover Velar in 2017, few realised the name’s significance. Velar was the codename for the original Range Rover, launched in 1970 and often seen as the first luxury SUV.

It wasn’t, because the first cars weren’t all that luxurious, and the Jeep Grand Cherokee had arrived seven years earlier – albeit not in Europe. But none of this really mattered, because what buyers really cared about was that the Velar looked great, offered serious luxury and was a true Land Rover. This meant that for those who needed to, it was capable of tackling seriously challenging terrain. But now, four years after its arrival, how does the Range Rover Velar stack up as a used buy?

The D300 V6 diesel offers the best balance of performance, refinement and economy; the smaller diesel is noisy, the petrol units are thirsty and the plug-in hybrid is costly.

The Velar S has 19-inch wheels, a powered tailgate, auto-dimming and powered folding door mirrors, and an 11-speaker hi-fi. The SE gets 20-inch alloys, matrix LED headlights and a rear parking camera, while the HSE has 21-inch wheels and adaptive cruise control.

Alternatives to the Range Rover Velar

Search the classifieds and you’ll see that used Range Rover Velar prices stretch all the way from £34,000 to £84,000.

While the Land Rover comes with only five seats, those prices allow you to look at a wide range of other SUVs, including the Range Rover and Range Rover Sport as well as the Jaguar F-Pace, plus the I-Pace if you want a desirable electric car. From BMW you could consider the X4, X5 and X6, while Audi can offer the Q5 and Q7.

Sticking with the Germans, how about a Porsche Macan or Cayenne, or a Mercedes GLE in regular or coupe forms? The seven-seat Volvo XC90 is very impressive, as is its five-seat smaller sibling, the XC60, while the hybrid-only Lexus RX is a less obvious choice.

The Velar can tow 2,400-2,500kg depending on model. Land Rover offered detachable and electrically deployed towbars.

The door handles are supposed to pop out electrically, but in sub-zero temperatures the system can freeze up, leaving you locked out.

The Velar doesn’t come with a tyre mobility kit; all models have a steel space-saver, or an alloy space-saver that was a £155 option.

Most gripes are about sub-par infotainment, and electronics glitches such as faulty navigation systems, CarPlay problems and touchscreen failures.

Electrical faults – particularly relating to the infotainment and sat-nav – are common with the Velar, and build quality issues have also been reported by some.

Land Rover’s interiors are some of the best around, and it’s this feel-good factor that keeps many owners coming back. The hi-tech touchscreen is user-friendly once you’ve worked everything out, but while the front seats are superb, space is tighter in the back, with room only for two adults. Boot space is good, at 632 litres with the rear seats in place or 1,690 litres with them folded.

The Velar has been recalled four times, with the first two occurring in March 2018 because of engine bay fuel leaks and problems with the air-con/ventilation of almost 6,000 cars. The third recall in January 2019 was for engine problems arising from failure of a crankshaft pulley retaining bolt. The most recent action came in April 2019 for excessive CO2 emissions.

Since the Velar was launched, the only Land Rover to get into a Driver Power survey was the Evoque, which came 100th in the 2019 used car poll. The Velar is a niche seller, but Land Rover finished 25th out of 30 in our 2020 brands survey. Carbuyer users gave the Velar 3.5 stars out of five; key niggles are noisy four-cylinder engines, indifferent dealers and reliability issues.

It’s easy to see why the Range Rover Velar was a hit for Land Rover. It’s one of the most stylish SUVs on the market, and one of the most luxurious. However, purchase costs can be pretty steep, so although the Velar sits between the Evoque and Range Rover Sport in the Range Rover line-up, it’s easy to spend Sport money before you know it. Scour the owner forums and you’ll see plenty of horror stories of dealers unable to keep customers satisfied when their cars have gone wrong, so if you decide that the Range Rover Velar is for you, check over any potential purchase extremely carefully and buy from a dealer with a great reputation.