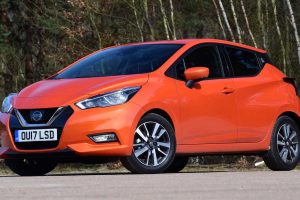 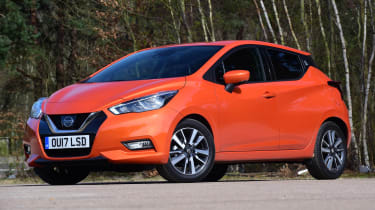 Nissan has a long and rich history of producing affordable cars, perhaps the most well known of which is the Micra. Initially launched in 1982, those first cars were highly regarded for their affordability, efficiency and reliability.

The second take on the formula was even better, while the quirkily styled Micra Mk3 was also endearing for a variety of reasons, so it was a shame that Nissan dropped the ball with the Mk4, which arrived in 2010. Developed primarily as a cheap car for emerging markets, it struggled to compete in the tough European market.

A clean-sheet design was needed for the Micra Mk5, and that’s exactly what we got three years ago, with Nissan delivering a distinctive and capable supermini.

The first Mk5 Micras were delivered in March 2017. At that point buyers could choose between a 0.9-litre turbocharged three-cylinder petrol engine or a 1.5 dCi diesel, both rated at 89bhp. A new entry-level model, with a 70bhp non-turbo 1.0-litre engine, arrived three months later.

There were six standard trim levels, but in September 2017 a Bose Personal Edition appeared, limited to 600 examples in the UK. Each was based on the range-topping Micra Tekna and included the Bose stereo of this car, along with orange detailing and LED headlights. Updates in January 2019 added a 116bhp IG-T 1.0-litre petrol engine, while the 89bhp unit was upgraded to 99bhp. An N-Sport trim level and a CVT automatic gearbox, dubbed XTronic, were introduced at the same time.

The 70bhp non-turbo petrol engine is fine for local journeys but struggles on longer ones, so we’d buy any Micra with a turbocharged engine, preferably with a manual gearbox rather than the CVT auto, because the latter isn’t as pleasant to use. 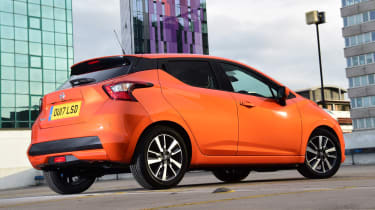 Alternatives to the Nissan Micra Mk5

The supermini segment is bursting with appealing options. The Ford Fiesta is a great all-rounder; it’s plentiful, has a wide model range, is roomy and well equipped, plus it’s great fun to drive. The Fiesta is eminently affordable, too, just like the Vauxhall Corsa, which is also plentiful and spacious.

The SEAT Ibiza looks smart, is easy to live with, keenly priced and comes with some great engines – just like its cousins, the Skoda Fabia and Volkswagen Polo, although the latter is relatively costly.

If value is more of a priority, take a look at the Kia Rio and the mechanically related Hyundai i20, both of which come with long warranties. Other superminis to shortlist include the Renault Clio, Mazda 2 and Peugeot 208, as well as the Toyota Yaris.

All Micras come with engine stop-start, apart from the entry-level Visia and models fitted with the 70bhp 1.0-litre engine.

The front and rear light units can suffer from condensation at times, but the owner’s handbooks says this is normal.

The Micra has a firm ride, and the DIG-T 117 is even firmer because it has sport suspension, so bear this in mind on the test drive.

Safety is a key feature, with all Micras getting autonomous emergency braking as standard, along with a lane-keep assistance system.

The cabin is a Micra high spot – at least for those in the front seats. The plunging roofline limits rear-seat headroom, but it’s not too cramped for adults, although the narrow rear windows can make the second row feel claustrophobic; mind you, no one expects masses of rear space in a supermini. 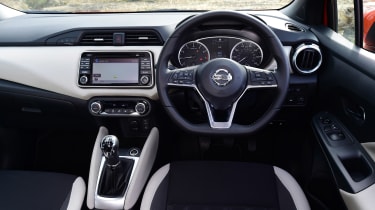 What impresses most is the clear design of the dashboard and the decent materials used throughout the interior, although the clunky infotainment system is beaten by rivals. Depending on spec, the Micra can also come with quite a bright, colourful cabin, which is a nice touch when rivals’ interiors are fairly dour.

Check out the latest used prices for the Nissan Micra on our sister site Buyacar.

All Micras need to be serviced every 12 months or 12,500 miles, whichever comes first, with those services alternating between minor and major. These are priced at £229 and £309 respectively for petrol-engined Micras, and £269 and £369 for diesel models.

Only the 1.5 dCi diesel engine is fitted with a cambelt, which needs to be replaced every 10 years or 100,000 miles; Nissan dealers charge £309 to do the work. The brake fluid needs to be renewed every two years or 25,000 miles, the cost of which is included in the major service. However, you’ll have to pay an extra £100 or so for the coolant to be replaced for the first time after 62,500 miles or five years, then every four years or 37,500 miles after that. The air-con should be regassed every 2-3 years at a cost of £149.

Four recalls so far isn’t a disaster by any measure. The first came in August 2017 and affected 1,615 Micras built between May 2016 and April 2017, which were fitted with a faulty ignition switch that could shut down the engine and refuse to let it start again. In March 2018, 14 Micras built in September and October 2017 were recalled because they were built with faulty wheel hubs. That was the smallest recall; the biggest, meanwhile, came in September 2019 and affected 12,119 Micras made between September 2016 and October 2017, which could suffer from the passenger airbag tearing in the event of a crash.

The most recent campaign came in October 2019 and affected a total of 1,985 Micras produced between July and November 2018; these cars had faulty VIN labels.

The Micra Mk5 didn’t appear in the 2020 Driver Power new car survey, but it finished a disappointing 63rd place (out of 75 entries) in last year’s poll. High spots included front seat comfort, fuel economy, steering feel and switchgear layout; everything else was mid-table at best. Of eight owner reviews on Carbuyer.co.uk, three give a five-star review, while the other five are just one star because of poor reliability.

When Nissan introduced the current Micra, it went to great lengths to emphasise just what an advance it was over what came before. It would have been easy to dismiss this as little more than marketing hype, but it really is a massive improvement over its predecessor in every way. Significantly bigger, far safer, much better built and far more distinctively styled, the Micra was the best-performing supermini in the 2018 Driver Power new-car survey. Most Mk5 Micras have yet to reach their third birthday, so many will still be under finance contracts, but as those policies expire there’ll be a flood of used cars arriving in the coming months.