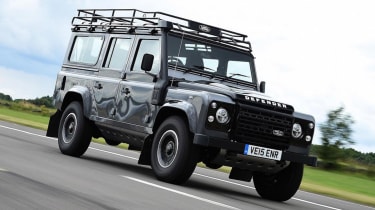 If ever there were a model that polarises opinions, it’s the Land Rover Defender. It has no shortage of fans, and in recent years these cars have become fashion statements, with a raft of companies providing engine transplants and luxurious interiors. As a result you can spend a fortune or very little on a Defender. But don’t even think about buying one if you haven’t at least taken an extended test drive; these cars have a lot of fans, yet they’re not the easiest vehicles to live with for a multitude of reasons. If a Defender is just what you need in your life, then don’t get too hung up on mileage or age – its condition is far more important. Defenders tend to be treated as workhorses or pampered and never taken off-road – there’s not very often much in between.

When the Land Rover marque was launched in 1948, inspired by the US Jeep from World War II, it focused almost exclusively on off-road ability. There was no attempt to provide luxury, refinement or speed – everything was designed to ensure that it had the best possible off-road prowess.

That’s how things stayed for nearly seven decades, because while the original Land Rover received plenty of updates along the way, it remained focused on its ability to tackle the most inhospitable of terrains.

Years before the final Defender was made in January 2016, the car had become a legend with a massive following, and values have gone up since then. But is this boxy 4×4 worthy of the hype? Here we’ll focus on the car that arrived in 1990, which was the first to wear the Defender name. 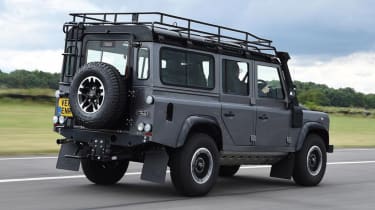 This engine was developed into the cleaner, more refined and smoother 300 TDI in 1994 (these cars also got a slicker gearbox). Then, from 1998, the TD5 powerplant was fitted. This car also got standard anti-lock brakes.

The newer the car, the more developed (and usable) it is – and generally the pricier to buy. No Defender is refined or comfortable, but later models got more efficient, muscular engines, with the four-cylinder units being far better than the five-cylinders.

On older Defenders, the key thing is to check the car is structurally sound. Later cars tend to lead easier lives, especially those bought as style statements. Short-wheelbase Defenders have a bouncy ride, while long-wheelbase cars are less uncomfortable. As well as the three and five-door versions, there were single and double-cab pick-ups, too.

Alternatives to the Land Rover Defender

There are other 4x4s available for the same money as the Defender, but few of them have the Landie’s off-road ability. 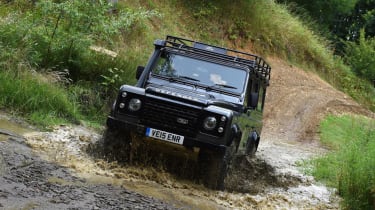 The Suzuki Jimny is even less suited to long-distance drives than the Defender, but these petrol-only three-door 4x4s are incredibly capable in the rough. The Jeep Wrangler is also very adept in tough terrain, but rather compromised on the road. Alternatively, consider a pick-up truck, such as the Nissan Navara, Mitsubishi L200 or Toyota Hilux. They’re all good for towing and off-roading, plus they’re surprisingly refined.

Defenders are among the most commonly stolen vehicles in the UK each year; get an insurance quote before buying.

Water getting into the cabin is very common, usually from the windscreen seal, the sunroof or above the screen. Check all of these areas.

Poor running is often the result of a faulty fuel-injection loom or ECU connector, a tired fuel pump or a blocked fuel filter.

Corrosion in the chassis can be very expensive to fix. The rear crossmember is usually the first component to go wrong here.

With flat, upright seats, plenty of hard plastics and little soundproofing, no Defender cabin is luxurious. Post-2006 cars are significantly more comfortable, but none has great ergonomics or much in the way of adjustment for the driving position. Equipment levels can be spartan, too; don’t assume that even late models come with items such as air-con, Bluetooth or electric windows. 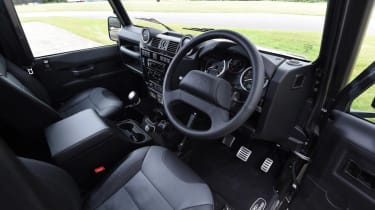 Defenders must be serviced annually or every 12,000 miles, but more frequent checks are worthwhile if you go off-road. Alternating interim and major services are £385/£495 with dealers. Independents will charge around £200-£300 a year for routine maintenance.

The 200 TDI and 300 TDI engines need a fresh cambelt every six years or 72,000 miles; dealers charge around £600 for this, but independents ask for closer to £400. All engines from the TD5 on were chain-driven.

The Defender hasn’t appeared in Driver Power surveys, but an army of enthusiastic owners have left reviews on carbuyer.co.uk, awarding it on average 4.1 stars out of five, compared with our less generous verdict. Many are hardcore off-roaders, so their praise is understandable, but what they view as character, some will see as flaws. If ever there were a ‘Marmite’ car, the Defender is it