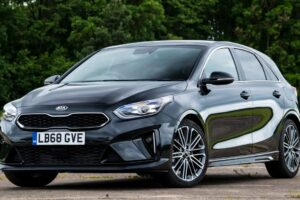 When the original Cee’d was unveiled in 2006, the idea of it competing with the Golf would have been laughable, but now the Kia is more desirable than VW’s evergreen family car in some ways. You get the same VW-like build quality but at a lower price, and while the Ceed is no longer cheap as such, you still get a lot of car for your money. Having said that, when we pitted a Ceed against a Skoda Scala and VW Golf, the Kia came last (the competition was especially fierce, though), while a triple-car shootout between the Ceed SW, Octavia estate and Mégane Sport Tourer put the Kia between the Skoda (in first) and the Renault. So while the Kia doesn’t always come out on top in our road tests, it does now compete with the best cars on the market.

This year marks 30 years since Kia arrived in the UK, and incredibly, its first car was made just six years before, although the company was founded in 1944 to make steel tubing and bicycle parts. The brand has grown enormously since that first product, a rebadged Mazda 121 sold here as the Kia Pride, went on sale.

By 2007 Kia had introduced its first car designed specifically for European buyers: the original Cee’d (shorthand for Community of Europe, with European Design), and this was a turning point, although the Cee’d Mk2 was a far more impressive product.

Indeed, it was so good that when the Mk3 arrived, in many ways it wasn’t a huge advance, although a range of more efficient powerplants and plenty of the latest tech brought the Ceed usefully up to date.

The 201bhp Ceed GT arrived at the same time as the ProCeed, powered by a 1.6 T-GDi engine, followed by the plug-in hybrid Ceed PHEV in March 2020. But this was ditched in July 2021, just weeks before a facelifted Ceed was launched. This brought mild-hybrid tech for 1.6 CRDi cars, an exterior refresh, improved connectivity and extra driver- assistance systems, while a 156bhp 1.5 T-GDi engine replaced the 1.4 T-GDi unit.

Even the 1.0-litre petrol offers reasonable performance, so all powerplants are quite perky and efficient, but the manual is more pleasant to use than the auto transmission.

Alternatives to the Kia Ceed

You’re spoiled for choice in this segment, with most mainstream brands offering something suitable. Closely related to the Ceed is the Hyundai i30, which is great value and has a five-year warranty. The Peugeot 308, Vauxhall Astra and Citroen C4 are closely related, so they share powertrains, have high-tech interiors and look smart, too.

Another trio that’s closely related is the Volkswagen Golf, Skoda Octavia and SEAT Leon. These high-quality family cars are easy to live with, good to drive and packed with the latest tech. You could also consider the Audi A3, which is also related but more expensive. More affordable are the Ford Focus, Honda Civic and Toyota Corolla, while the Mazda 3 is another great option.

All Ceeds came with a tyre repair kit, apart from the limited-run GT-Line Lunar Edition. This was fitted with a space-saver spare wheel.

The Kia Ceed Mk3 had a strong showing in its 2022 Driver Power outing, coming 16th overall, with an impressive score for reliability and build quality. As a brand, Kia was ranked third, again with an excellent mark for reliability.

Remove the Kia badges and you could be forgiven for thinking you’re inside a Volkswagen, such is the quality of the fit and finish, plus the clarity of the dash layout, which is thoroughly modern.

Cabin space is impressive, with room for three adults in the back, but despite this there’s decent boot space, too. The luggage bay can stow 395 litres with the seats up, or 1,291 litres with them folded. If that’s not enough, the estate’s figures are 625 and 1,694, although the PHEV’s and diesel’s are a bit less.

The infotainment touchscreen could be better integrated – it’s stuck on top of the dashboard – but comes in eight-inch or 10.25-inch configurations.

All Ceeds need to be serviced every 12 months, and while there’s a 10,000-mile limit for petrol-engined models, the 1.6 CRDi stretches this to 20,000 miles. Maintenance costs vary significantly depending on the engine fitted and which service is due, but expect to pay £100-£160 for routine check-ups for a diesel, although the fourth service is more complex and pegged at £270.

Kia has a more impressive track record when it comes to recalls than many other manufacturers, because it hardly ever issues any. The Ceed Mk3 is a perfect case in point, in that it has never been the subject of a safety-related recall in the UK, and neither have either of its predecessors. Since the Ceed Mk3 arrived in the UK, Kia has issued a total of 14 recalls across its entire model range, which averages out at less than four per year.

Those recalls were aimed at the Soul, Stinger, Picanto and Sorento, along with the Sedona, Optima and Niro. Most of these campaigns were launched because of electrical or electronics problems, but there was one for faulty rubber fuel hoses, and another because cars could sometimes roll away due to a faulty parking brake.

Nevertheless, you don’t need to check for any recall work having been completed on a Ceed.

The Ceed Mk3 made its Driver Power new-car debut in 2020, when it came 18th out of 75 cars. In 2019 it was 17th, and in 2022 it was 16th. The only top-10 score was for low servicing costs, but its value for money, the user-friendly design and ergonomics, quality and reliability also scored highly. While owners are less impressed by the all-round visibility and the driving experience, the Ceed is very competent in most areas.