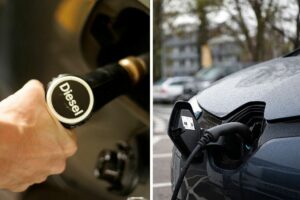 However, the data also showed that the overall prices for used cars have started to fall.

The report showed that from April to the beginning of May 2022 prices fell by 1.4 percent and are now 0.1 percentage points lower than at the start of January.

According to BCA Marketplace, the average values of used cars have fallen from £12,000 in September to £8,552 in April.

BCA UK COO Stuart Pearson said: “For the first time since the onset of the pandemic in early 2020, the used vehicle marketplace is starting to exhibit some of the more typical traits we might have expected to see in previous years.

“Traditionally the used car market would soften post-Easter as inventory swelled following the plate-change and consumers focused their spending priorities on other things, such as funding the family holiday.”

The popularity of EVs and the high demand for them has significantly affected the stocks of electric cars.

Jon Mitchell, Indicata UK’s group sales director, said: “EVs are in such high demand that stock levels have fallen dramatically over the past few months.

“We have really noticed a step change in demand since the beginning of the year.

“However, overall average prices have settled down and are back to the levels they started the year at.”

British drivers bought more EVs this year than ever before.

The number of electric vehicles bought in the UK in March alone was higher than during the entirety of 2019.

This in turn made March’s figures the highest on record for a single month.

The data also marked a 79 percent increase from March 2021 and found that battery-powered cars now account for one in six registrations.

The evidence of the soaring demand for battery-electric cars was provided by the Society of Motor Manufacturers and Traders (SMMT), a lobby group.

It is now estimated by some analysts that battery EVs will become the most popular fuel type as soon as 2025.

Hybrid electric vehicles also grew by nearly 30 percent to some 28,000 cars, although plug-in hybrid registrations declined by around eight percent.

The figures obtained in March have provided some hope for the car industry at a time when it has struggled for more than a year with computer chip supply bottlenecks.