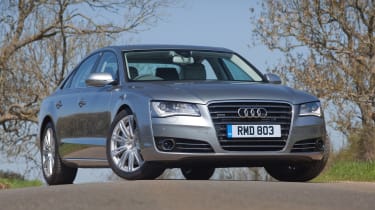 The bigger they are the further they fall; that’s certainly the case for the A8, which cost plenty when new but can now be had for less than £10,000. Don’t be fooled into thinking you can run one for peanuts, though; these can be expensive cars to own when it comes to insurance and maintenance. If you can afford the running costs there’s no reason not to buy an A8 other than brand loyalty; each contender in this segment is quite different in terms of design and driving experience. We’d say both of these are strong for the Audi, though, so if you’re in the market for a luxury saloon, put the A8 somewhere near the top of your list.

Considering Audi is one of the world’s more successful premium brands, it seems incredible that it wasn’t until 1988 that it launched its first luxury car, the V8.

By that time Audi’s rivals had been selling luxury saloons for many years, whereas Audi had offered only executive cars. The Audi V8 didn’t make much of an impact and the car arguably deserved a better fate, so when Audi created its successor, the A8, it came up with something altogether more special – an aluminium-bodied saloon packed with tech and standard four-wheel drive. That was in 1994, and since then Audi has raised the bar ever-further with each new generation of A8. Here we look at the third take on the formula.

The A8 Mk3 arrived in UK showrooms in spring 2010, priced from £54,760. Buyers were able to choose between 4.2 FSI petrol or 3.0 TDI and 4.2 TDI diesel engines, all with an eight-speed automatic transmission; a 3.0 TFSI petrol engine was added soon after. 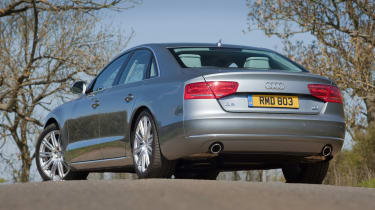 More reviews for A8

Most A8s were sold with the 3.0 TDI engine which is just as well, since it’s the powerplant that offers the best blend of performance and economy. It’s all you need thanks to the relatively light aluminium body, which brings ultimate luxury in long-wheelbase form. At 5,265mm, the A8 L is a lengthy car; but even the standard A8 isn’t tight in the back.

Alternatives to the Audi A8

The hi-tech Mercedes S-Class is a formidable rival with peerless build quality, brilliant engines and a superb cabin. It’s the most popular car in its segment, so there are also plenty to choose from on the used market; no wonder it’s the chauffeur’s car of choice.

The BMW 7 Series is rarer, but shares the most important S-Class traits, while Jaguar’s XJ (2010-2019) has excellent petrol and diesel engines and a choice of standard or long wheelbases. The radical looks don’t suit everyone but as the only other aluminium-bodied luxury car contender, fuel economy is a bit more palatable.

What to look out for

All A8s come with standard quattro four-wheel drive, along with an eight-speed automatic gearbox. 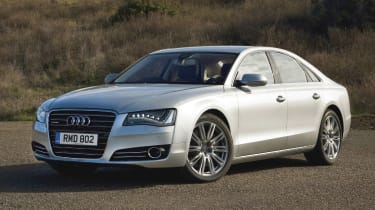 The original A8 was codenamed D2 by Audi, while its successor was called the D3. Following the trend, this model is known as the D4.

Be especially scrupulous checking for any panel damage, because fixing aluminium dings is a specialist and expensive job.

As well as the points listed below, electrical gremlins are not unheard of, so check everything works and that no warning lights stay on.

The A8 is Audi’s flagship saloon, and its cabin is awash with premium materials and gadgets. As a result it’s safe, luxurious, spacious and a wonderful place to spend time. The back seats offer more than enough head and legroom; opt for the A8 L and there’s a ridiculous amount of space. The boot is very good, at 510 litres, but the rear seat backs don’t fold, so you can’t carry longer loads very easily. 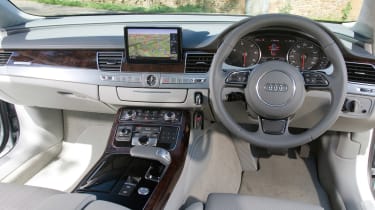 Fixed or variable servicing is offered. The former is every 9k miles/one year; the latter up to 19k miles/two years.

There are three intervals (minor, interim, major) with the first being just oil and filters. Which service is due depends on mileage and whether the car is on a fixed or variable scheme, but in simple terms they are priced at £275, £395 and £895. All engines are chain-driven.

This A8 has been recalled seven times, first in October 2013 because the sunroof of 140 cars could shatter. Fuel leaks on the 3.0 TFSI led to a recall in April 2015; a third came in February 2017 for airbags and seatbelt tensioners. Head restraints led to the fourth in April 2018, while 2019 saw a recall for shock absorbers, fuel leaks, and front passenger seat mountings on two cars.

The A8 hasn’t appeared in any Driver Power surveys, and just eight owners have left reviews on the Carbuyer website – all bar one gave the Audi at least four stars out of five. While that one owner suffered catastrophic gearbox failure (and a £12,000 bill) on a 55,000-mile car, most owners enjoy the A8’s refinement, luxury, value and economy, with excellent winter-weather ability