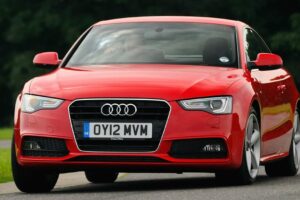 Strong performance, terrific grip and still fun to drive, but BMW and Mercedes have moved the goalposts

Originally launched in 2007, the A5 has been around for a while now, and with fresher rivals like the BMW 4 Series and a new Mercedes-Benz C-Class Coupe on the block, the Audi has plenty of competition.

The best engine to go for to combine performance and economy is the 2.0-litre TDI diesel – it’s strong, quiet at idle and makes a pleasingly subdued hum higher in the rev range. With 173bhp it does 0-62mph in 8.2 seconds.

Even the tweaked 159bhp version in the A5 Ultra comes with no obvious eco-compromises in its quest for greater efficiency. It’s smooth throughout the rev range, pulls strongly from low revs and rattles off 0-62mph in 8.3 seconds in two-wheel-drive guise with a manual gearbox. Opt for the auto ’box with either front- or four-wheel drive and that time drops to 7.8 seconds.

At the other end of the line-up Audi offers a performance-focused version of each A5 bodystyle. These versions use a snorting 3.0-litre V6 diesel engine producing 328bhp, as well as the firm’s quattro four-wheel-drive system for extra traction. The 0-62mph time drops to 5.8 seconds, while top speed is limited to 155mph.

On the petrol side the range starts with the 168bhp 1.8-litre TFSI offering 0-62mph in 7.9 seconds, while the 219bhp 2.0-litre TFSI quattro does it in 6.4 seconds. Neither engine has the grunty feel of its diesel equivalent, and they’re less efficient. You couldn’t say the 3.0 TFSI engine lacks grunt in S5-badged petrol quattro A5 though, offering as it does a 0-62mph time of 4.9 seconds with a maximum of 155mph.

You wouldn’t identify a lack of performance in the RS5 Coupe either, with its 444bhp 4.2-litre V8 and dual-clutch gearbox. It dispatches 0-62mph in 4.5 seconds on its way to a 174mph maximum.

The Audi A5 could never really compete with the old BMW 3 Series Coupe when it came to driving enjoyment, and the arrival of the 4 Series meant the gap between Audi and BMW in this class opened up even further.

The Audi doesn’t feel as sharp or responsive as the BMW, and its steering feedback is more artificial. Thanks to the quattro four-wheel drive, however, there’s loads of grip and it’s still fun to drive. Body control is excellent with minimal lean through the corners and even the basic front-wheel drive models are enjoyable enough. The ride and cabin noise levels are excellent at all times as long as you steer clear of the bigger wheels.

The dual-clutch S tronic automatic transmission serves up fast shifts and decent manual control via steering wheel paddles. The £375 Dynamic Steering that varies the electronic assistance and the £520 Adaptive Damping and Drive Select system that alters the suspension firmness and other parameters are also available, although neither really makes things hugely different.

Alongside its larger alloys, the top-spec Black Edition also gets stiffer suspension, which means the ride is pretty firm. On country roads you’ll notice bumps and potholes send shudders through the steering wheel. Still, Audi offers a softer setup as a no-cost optional extra.