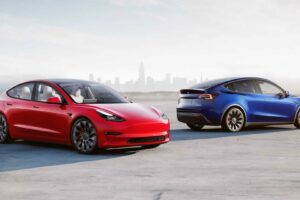 The amendment would put limits on who can get the credit and which cars will qualify.

Just days after the US Senate voted in favor of the Biden administration’s massive infrastructure plan, the Senate also voted in favor of an amendment that could work to limit the upcoming US federal electric car tax credit.

As we previously reported, there is no longer language related to an EV tax credit in the infrastructure deal. Many of the original plans for the bill were removed or adjusted in order for the Senate to come to a bipartisan agreement. Somewhat surprisingly, the new $1 trillion bill passed with a vote of 69-30.

With that said, the vote on a non-binding amendment to limit EV tax credits also passed, albeit by a very slim margin of 51-48. While Republican Senator Marsha Blackburn from Tennessee – a state with current and future plans to produce EVs and batteries – opposed the amendment, three Democrats sided with Republicans to push it through. It comes as no surprise that the supporting Democrats were Joe Manchin of West Virginia, and Kyrsten Sinema and Mark Kelly of Arizona.

The non-binding measure was first proposed by Nebraska’s Republican Senator Deb Fischer. It states that people making over $100,00 per year shouldn’t be able to claim an EV tax credit. In addition, it would end tax credits on EVs that cost over $40,000. Based on current prices, this would impact most electric vehicles currently on sale in the US, as well as many future entrants.

Michigan Senator Debbie Stabenow argued against the agreement saying that it works against future electric pickup truck owners, though it really works against people considering most electric vehicles.

As Democrats plan to move forward with debate on a $3.5 trillion budget resolution, which will work to reconcile some of the important pieces missing from the infrastructure bill, the non-binding amendment will come into play. However, it’s important to note that a non-binding agreement can’t progress into law, but that doesn’t mean it won’t steer decisions related to the resolution.

What do you think of this amendment? Start a conversation in our comment section below.