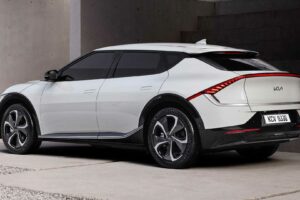 According to Kia, its EV electrified (HEVs, PHEVs and BEVs) more than doubled last month:

“Led by the Sportage family of SUVs, including the Sportage HEV and PHEV models, which were up 118-percent over the same period a year ago, October sales were also boosted by a 101-percent year-over-year increase for Kia’s electrified models.”

However, sales of the all-electric Kia EV6 further decreased in October, to the new lowest monthly level of 1,186. That’s about 2% of the total volume.

It’s another disappointing result for the EV6, probably related to the limited supply of the model rather than demand.

There is no clear answer as to what is happening with the EV6 and what will happen in the future. On one hand, the lineup will be reinforced by the performance-oriented Kia EV6 GT version (above the GT-Line trim), which can accelerate from 0 to 60 mph in 3.4 seconds.

On the other hand, if the Kia EV6 is not eligible for the $7,500 federal tax credit in 2023, it might significantly reduce the number of orders, especially if competitors (like Tesla) will get access to the modified incentive.

Unfortunately, the manufacturer does not report sales of other plug-in models, as they are counted together with conventional or non-rechargeable hybrid versions.

According to our data (from a different data set, provided by the manufacturer), during the first nine months of this year, Kia sold over 7,000 Kia Niro EV in the US.

The latest new model in Kia’s plug-in lineup is the Kia Sportage PHEV model, which offers up to 32 miles (51 km) of all-electric range.