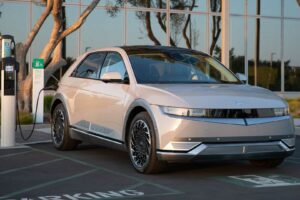 Hyundai Motor Group has significantly improved its position in the all-electric car segment in the US after the launch of the Hyundai Ioniq 5 and Kia EV6 models.

During the first quarter of this year, a total of 158,689 new all-electric cars were registered in the country (up 60% year-over-year), which is a 4.6% market share.

According to the car registration data from Experian in a new Automotive News‘ article, which is focused on the South Korean manufacturer, Hyundai Motor Group has become the second biggest BEV player after Tesla (which holds over 71% of the segment).

Hyundai Motor Group noted a total of 15,414 registrations, used as a proxy of sales, which is more than two times the number posted by Ford (7,407), not even mentioning General Motors (below 1,000 sales in Q1).

One of the most striking things is that the Hyundai Ioniq 5, with 6,957 registrations, was just behind the Ford Mustang Mach-E and the Kia EV6 had 4,901 units. Those three models are the only non-Tesla ones in the US’ top 7.

It’s not the right time to draw far-reaching conclusions, as the BEV market is still in the early days and most of the manufacturers are struggling with production rather than demand, but it’s clear that Hyundai Motor Group had a pretty good start in 2022.

Automotive News notes that the South Korean company is already far ahead of Japanese manufacturers thanks to multi-billion investments and a high number of new BEV models in the pipeline.

Five new electric cars will be launched by the end of 2023, including the Hyundai Ioniq 6 midsize sedan, Kia EV9 three-row SUV and Genesis GV60 (all three E-GMP-based).

Important is also the intention to locally produce plug-in models in the US, as part of a $7.4 billion investment by 2025.