Home » Car Reviews » US: Hyundai Ioniq 5 Sales Decreased In August, But Why?

US: Hyundai Ioniq 5 Sales Decreased In August, But Why? 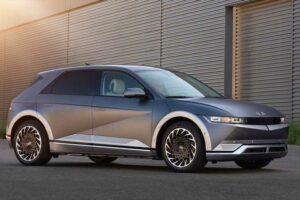 In August, Hyundai Motor America sold 64,335 cars in the US, about 14% more than a year ago. The company notes that inventory levels improved, which translated into a higher sales. Nonetheless, it might take some time to improve also the year-to-date result – currently at 468,833 (down 12%).

Hyundai reports also that its all-electric Ioniq 5 model noted 1,516 units last month, which is noticeably below average (above 2,100 per month) and a bit disappointing. We guess that the Hyundai Ioniq 5 has supply issues that hold it back.

Overall, the Ioniq 5 sales in August represented about 2.4% of the Hyundai’s total volume.

Unfortunately, the official stats do not include the sales results of other all-electric or plug-in hybrid models (Kona Electric, IONIQ Electric, IONIQ Plug-In, Santa Fe PHEV and Tucson PHEV), as they are counted together with conventional or non-rechargeable hybrids.

The Hyundai Ioniq 5 is the first model based on the Hyundai Motor Group’s E-GMP platform, used also by the Kia EV6 and Genesis GV60. Next year, it will be joined by the Hyundai Ioniq 6, which recently set an amazing presale record of 37,446 preorders on the first day in South Korea.

The warm welcome of the Ioniq 6 is a good news, but at the same time, it might amplify the demand/supply issues. A limited allocation of Ioniq 6 in particular markets (South Korea, Europe, US) would not surprise us.

Anyway, Hyundai’s EV push appears to already be beneficial to the company. The Hyundai Motor Group as a whole is #2 in the US BEV market after the first six months, ahead of Ford.