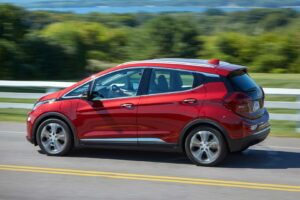 The ad primarily features the Chevy Bolt, which doesn’t appear on Cars.com’s American-Made Index at all.

President Joe Biden tweeted out a new US government ad to further emphasize his administration’s focus on the future of electric vehicles. As you may already know, Biden wants to assure that US automakers excel when it comes to EVs, and the electric cars made in the US get the credit they deserve. However, it seems the administration made a minor mistake here.

Before we dive in, we should also remind you that as Biden’s team was working on details related to potential federal tax credits, it was learned that EVs made in the US would get larger incentives.

In addition, extra monies would also be granted to cars produced by unionized automakers, which would prove extremely controversial, and work specifically exclude Tesla. Now it seems there will be no new EV incentives, so it may no longer matter.

Fast-forward to the present, and now we have this ad, which focuses primarily on the Chevrolet Bolt EV. Granted, it would be much easier for anyone to get their hands on a Bolt rather than a Tesla Model 3. Moreover, the Bolt in the video is already part of a government fleet, so it likely made perfect sense to use it.

With that said, upon posting the ad, Biden received some negative comments for leaving out the Tesla Model 3. The Cars.com 2021 American-Made Index just came out, and the Model 3 was listed as the most American-made car. This is the first time an EV has ever topped the list. The Tesla Model Y came in third place. Out of a list of 90 vehicles, the Bolt EV is nowhere to be found.

We will say that GM certainly deserves credit for building cars in the States. In fact, the automaker had more cars on the American-Made Index than any other automaker, at 19. We will also say that since the Bolt has now arrived as a new 2022 model, there’s a chance it will be on the American-Made Index next year. We did notice that other brand-new or completely redesigned models aren’t featured on the list either.

Aside from the ad featuring the Bolt instead of the Model 3, which is really only a minor concern that Tesla fans will certainly blow out of proportion – primarily because it’s things like this that happen to Tesla on a continuous basis – the ad is well done. It features EPA Chief Gina McCarthy and Energy Secretary Jennifer Granholm. Give it a watch and then leave a comment.