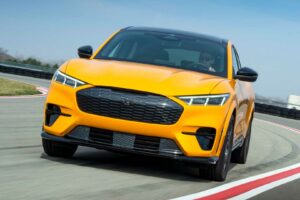 In June, the company sold almost 2,500, while the production for global markets increased to almost 7,000.

Ford brand reports 110,886 vehicle sales in the U.S. in June, which unfortunately is down 26% year-over-year, despite there being high demand, according to the manufacturer. It seems that the semiconductor shortage affects the company significantly.

“Ford sales of electrified vehicles expanded 117 percent in June, capping off a new first-half sales record on sales of 56,570 vehicles.”

The Mach-E in the U.S. remains production constrained, as the manufacturer reports only 11 days to turn (compared to 7 days in March, 4 days in April and 10 days in May).

“With just 11 days to turn, Mustang Mach-E is essentially selling as soon as it arrives at dealers.Mach-E sales totaled 2,465, with 12,975 Mustang Mach-Es sold through the first half of the year. Customers are telling Ford their primary reasons for purchase is the technology, design and performance that Mach-E provides.”

Unfortunately, Ford does not report sales of other plug-in models, like the Ford Escape PHEV. Lincoln’s PHEV were not revealed either.

Production of the Ford Mustang Mach-E for the global markets continues to increase and in June reached a new monthly high of 6,963.

So far this year, Ford produced 34,779 Mach-E, while cumulatively it’s over 41,000. We guess that the majority were sent to Europe.