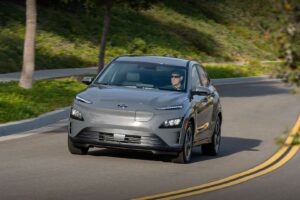 The car has received also a fair number of enhancements.

It’s a good thing, which should help the Kona Electric to remain competitive, especially since the new version brings noticeable upgrades.

The battery pack and powertrain remains the same and according to the official EPA numbers, the range remains at 258 miles (415 km).

It makes the car probably the cheapest in terms of price (MSRP + DST) per mile of EPA range, at $136/mile. After deducting the federal tax credit, it starts at $107/mile.

The Hyundai Kona Electric is not the only BEV that is now more affordable. Just recently we heard about the new, lower MSRP prices for the Nissan LEAF lineup and Polestar 2.

Of course, the dealer prices and MSRP prices are often two different things, but the direction towards more affordable electric cars is clear. Well, maybe it’s the opposite in the case of Tesla, but those are in high demand.