UMWT sales for Toyota and Lexus breach 80k, 47% up – paultan.org 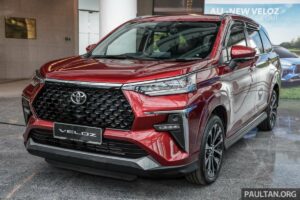 Of this total, 79,308 units are from the Toyota brand, which leads the non-national sales charts. “This is a continuation of the positive upward trend which started at the beginning of the year and the brand has consistently been a market leader throughout the year, especially in the pick-up truck segment,” UMWT said in a statement. “While economic conditions remain challenging, the car market has also been steadily recovering its strength in the course of the year. Thanks to the support of our loyal customers, demand for Toyota vehicles remains high and for those who have had to wait a bit longer for their new vehicles, we are working hard to ensure the quickest possible delivery of their vehicles,” said UMWT president Ravindran K.

“Our production is still partly affected but rest assured that we are doing our best to deliver new vehicles as quickly as possible,” he promised.

Toyota’s most recent launch was of the Veloz, a ‘Premium Crossover’ that promises ‘Happiness Inside Out’. A sister car to the Perodua Alza but with more features, a unique face and a higher ride, the RM95k Veloz received over 7,000 orders before its October 18 official debut.

On the positive response to the seven-seater, Ravindran said: “This is not surprising as it is a Toyota, and the brand’s products are well known for high quality, durability and reliability. On top of trusted products, we go the ‘Extra Mile’ in providing the best ownership experience to every one of our customers”. Full details and walk-around video of the Veloz here.