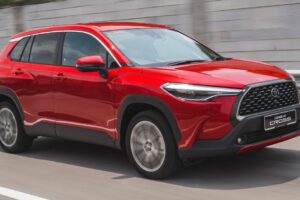 UMW Holdings has announced UMW Toyota Motor’s (UMWT) sales performance numbers for the month of May, with the company reporting that it sold 7,595 units last month. This is a drop of 1,685 units or 18.1% from the 9,280 units of Toyota and Lexus models it managed in April.

However, the company said it has now sold 34,026 vehicles in the first five months of the year, which puts it well on track to meet its target of selling 62,000 units this year. In February, a strategy plan revealed its ambition to reclaim the No.1 non-national spot from Honda this year.

No specific data breakdown for the month’s sales was provided, but the company said that the Toyota Vios, Yaris and Hilux continue to be its best-selling models, cumulatively contributing 78% of total sales for the month. It added that the recently-launched Corolla Cross and Harrier also contributed positively to sales in May. While all CBU units of the Corolla have been accounted for, the company is continuing order-taking for the CKD locally-assembled version, which will be available for delivery by Q4.

“UMW expects the automotive sales momentum will continue despite the extended MCO, especially with the extension of the sales tax exemption to December 31. We are appreciative of the government’s various measures to support the automotive sector, which will hasten the recovery. We wish to also express our appreciation and thank you to our customers for their continuing support of our products and services despite the challenges,” UMW Holdings president and group CEO Datuk Ahmad Fuaad Kenali said via a statement.

Earlier this month, the company announced that while its showrooms were closed during the full movement control order (FMCO) period, selected Toyota 3S and 4S centres, including body and paint facilities would be operational. However, customers are required to book a service slot beforehand – unscheduled walk-in requests will not be entertained, as it is by appointment only.