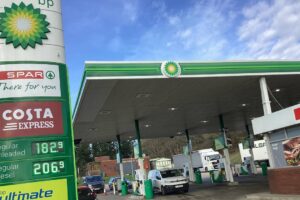 Average petrol and diesel pump prices hit record highs of 170.35p and 181.35p per litre respectively in the UK

The average pump prices of petrol and diesel in the UK have once again hit record highs. Petrol is now 170.35p per litre, whereas diesel averages at 181.35p per litre.

The fuels started hitting record prices in late March, rising even further in recent days and weeks as the cost of living crisis continues.

Luke Bosdet, the AA’s fuel price spokesman, called the latest price rises a “milestone of misery”. He added: “There is still quite some variation in pump price among fuel stations in most areas and between many towns. It is particularly galling when supermarkets of the same brand are charging significantly more at one superstore compared to another not that far away.”

RAC fuel spokesperson Simon Williams commented: “Petrol reached another unfortunate landmark yesterday when the average price surpassed £1.70 a litre for the first time ever by hitting 170.35p. This makes the cost of a complete fill-up [of an average 55-litre family car] £93.69.

“While wholesale prices may have peaked for the time being last week, they are still worryingly high, which means there’s no respite from the record-high pump prices which are so relentlessly contributing to the cost-of-living crisis.

“We badly need the Government to take more action to ease the burden on drivers, which we hope will feature in its announcement expected this week. VAT at 20 per cent on fuel is currently benefiting the Treasury to the tune of around 30p-a-litre, which seems very unfair when you consider it’s a tax on a tax, as fuel duty – despite being cut to 53p a litre at the end of March – is charged at the wholesale level.”

Why are diesel and petrol so expensive?

Russia is one of the world’s largest producers of oil and gas, so any disruptions to its production processes has a global impact.

With Russia having launched a full-scale invasion of Ukraine and facing international sanctions, there’s potential for significant disruption to supplies. Russia produces 4.5 million barrels of oil each day, and only Saudi Arabia produces more.

The sanctions levied against Russia so far have targeted banks and oligarchs rather than the country’s energy sector, but factors such as Germany’s postponement of the Nord Stream 2 gas pipeline will have an effect on the energy market overall. Russia also has the ability to reduce oil exports to Europe in a tit-for-tat response to economic sanctions, and experts suggest Saudi Arabian oil fields could struggle to increase production sufficiently to counter such measures.

“Opec, the oil producers’ cartel, is already struggling to meet its output targets as demand for crude rebounds following the easing of lockdown restrictions. This has pushed up prices, with analysts warning there is limited capacity to increase supplies if flows from Russia are affected by sanctions,” the Financial Times newspaper has reported.

When will fuel prices go down?

Experts predict high fuel costs will be with us for the foreseeable future, and it’s not just down to the crisis in Ukraine – energy costs have been high for the best part of a year already as demand surged as the world emerged from lockdown.

Part of the problem is down to the fact that relatively low barrel prices in recent years have put plans to drill for new reserves on hold. That’s true in Africa, the US and South America, and while the current high prices may increase interest in exploring new reserves, it can take years for new wells to come on stream in volumes required to affect the market.

Recently, the influx of cheap diesel from countries like Saudi Arabia has turned the tide, swinging diesel wholesale prices closer to that of petrol, and bringing the pump price down with it. However the fact that we get a higher percentage of diesel from Russia than petrol means the advantage has swung the other way again.

What’s your view on fuel prices in the UK? Do we pay too much for our petrol and diesel? What would you do about it? Join the debate in our comments section below…