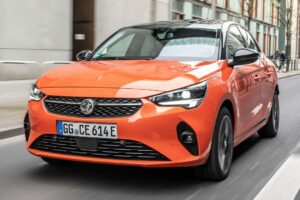 New car registrations grew by just one per cent in 2021 with a total of 1.65 million cars registered compared with 1.63 million in 2020. That makes 2021 the second-worst year for car sales since 1992 and still around 25 per cent down on 2019. “It’s been a tough old year,” said Society of Motor Manufacturers and Traders chief executive Mike Hawes.

However, while dealership shut-downs due to Covid were a major cause of slow sales in 2020, SMMT puts 2021’s drop almost entirely down to the shortage of semi-conductors affecting new car supply.

Petrol still makes up by far the greatest number of cars sold with 58 per cent of all cars registered, with diesel still accounting for 14.2 per cent.

When it comes to cars, Vauxhall’s Corsa stole top spot from Ford’s Fiesta, which slid out of the top ten altogether. It’s the first time in 50 years that a Ford has not taken the number one position in the new car registrations chart; Ford’s Puma made it into the top ten in eighth place.

Tesla’s Model 3 was the best-selling electric car and second-best seller overall in 2021, with the British-built MINI in third place and the MINI Electric taking seventh slot in the EV chart.

The supply issues affecting the new car market are expected to continue into 2022 with SMMT currently estimating 1.96 million registrations for the year – still below what SMMT describes as “the usual run rate of 2.25/ 2.3 million.”

“It will be a challenging first half of the year,” said Hawes, “But it will ease. Our advice to customers is to get your order in and they’ll be fulfilled as soon as possible.”

Electric car sales are expected to continue to increase with SMMT expecting another 47 new plug-in cars to be launched during 2022. However, Hawes fired a warning shot at the government and charging industry claiming that the public charging network is becoming a big barrier to EV adoption. “The pace of the continued take-up of electric vehicles will be about supply, but also assuring customers that this is a technology they can live with,” he said.

“That relates directly to the experience they have with charging; the availability of charging across the nation, but also in terms of the cost of charging and reliability of the charging framework, which we know isn’t as good here as it is in some other countries.

“The car industry is up for the challenge of 2030-2035 – we need all the other stakeholders to play their part as well.”

Thinking of buying an electric, petrol or hybrid car? Read our buying guide to help you along the way…