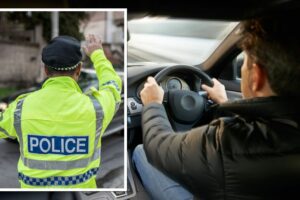 According to a new survey, millions of UK drivers could be risking major fines and penalty points for engaging in potentially dangerous practices. An estimated 43 percent of drivers admitted to being superstitious with these practices potentially leading to a lapse in concentration when on the road.

One of the most common “rituals” UK drivers partake in is saluting a magpie to ensure they have good luck.

A staggering 36 percent of drivers admitted to doing this, despite it possibly breaching Highway Code rules.

Rule 60 of the Highway Code states that road users must keep both hands on the wheel or handlebars where possible.

This will help them remain in full control of the vehicle at all times, with certain exceptions being allowed including when changing gears.

A further 12 percent of drivers admit to honking their horn before entering a tunnel, something which could lead to fines.

Rule 112 of the Highway Code states: “Use only while your vehicle is moving and you need to warn other road users of your presence.”

It also outlaws sounding the horn aggressively and when stationary on the road.

Police can issue motorists with a fine for the illegal use of car horns.

This is usually a fixed penalty notice (FPN) of £30.

If drivers don’t agree with an FPN being issued, they can challenge the decision in court – but if they lose, the fine can be increased to up to £1,000.

Mark Akbar, Managing Director of CarStore, urged drivers to keep safe on the roads and avoid doing anything which could put them or others at risk.

He added: “Swot up on the Highway Code – particularly if you’ve been driving for a long time.

“It’s updated regularly, and the new and revised rules might surprise you.

“Among the recent updates is the inclusion of the ‘Dutch Reach’, the safety practice whereby drivers and passengers use the hand furthest from the door to exit their vehicle.”

Shockingly, 16 percent of drivers said they hold their breath when driving through a tunnel.

Supposedly, if a driver can make it through an entire tunnel without breathing, they can then make a wish at the end and the wish will come true.

On rare occasions, this can lead to a driver passing out or even an irregular heartbeat, particularly if they have a pre-existing medical condition.

The UK’s longest tunnel is the A3 Hindhead which is 1.4 miles long, meaning drivers would be holding their breath for a minimum of one minute, depending on traffic.

Mr Akbar continued, saying: “A shocking 21 percent of accidents are caused by careless driving, so it’s important you keep up to speed with any changes.

“Remember the best way to keep yourself, your passengers and other road users safe is to regularly MOT and service your vehicle, and ensure you are buying a safe car in the first place.

“Vehicle faults cause two percent of road accidents every year – which might sound like a small number, but these are often avoidable.”