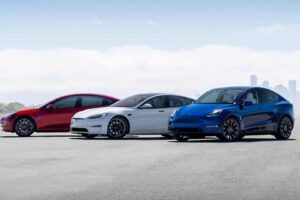 Posted on EVANNEX on August 19, 2021 by Charles Morris

Allegra Stratton, Boris Johnson’s spokesperson for the Cop26 climate summit, seems to have a talent for making daft, headline-generating statements. In an article for The Telegraph, she wrote that people could reduce their climate impact by not rinsing their plates before putting them in the dishwasher (arguably true, but trivial in the extreme). She told The Independent that if people are concerned about carbon emissions, they should consider joining the Green Party (her boss is the leader of the competing Conservative, or Tory, party).

Now Ms. Stratton has caused a dreadful fuss with some comments about electric vehicles. In an interview with Times Radio, she revealed that she drives an elderly diesel VW Golf. As for driving electric, she said, “I don’t fancy it just yet.”

Stratton explained that she often visits elderly relatives “200, 250 miles away,” and doesn’t like the idea of stopping to charge. “They’re all journeys that I think would be at least one quite long stop to charge,” she said, adding that an electric car would be a more viable option if “the stop times for recharging improve so much that it’s half an hour.”

British electric vehicle advocates are ever so cross, apparently believing that the UK government’s point person for climate issues should be encouraging EV adoption, rather than perpetuating outdated EV myths. Car experts told the Guardian that an increasing number of chargers on British roads can charge an EV’s battery from about 20% full to 80% within half an hour.

British motoring association AA pointed out that the average EV sold today has a range of more than 200 miles (Tesla’s Model 3 Standard Range Plus offers 263). “Even on a rare journey of over 200 miles, the driver should stop to take a break anyway for road safety reasons, so why not combine it with a rapid charge that takes just 20 minutes to go from a quarter charge to over 80%?” AA president Edmund King told the Times.

Ian Plummer, Commercial Director of Auto Trader, said that there are now over 25,000 public charging points in the UK, of which nearly 5,000 are “rapid” or “ultra-rapid” DC fast chargers, and that the government needs to make the case for electric cars better. “We need very clear messaging that not only dispels outdated misconceptions but encourages consumers to make the switch on a large scale.”

“Comments like Allegra’s continue to perpetuate these barriers [to EV adoption] by fueling archaic negative connotations with electric vehicles,” said Adrian Keen, Chief Executive of charging network InstaVolt. “In her position of authority as government climate spokesperson, it’s potentially incredibly damaging to the EV sector—and the government’s climate change targets as a whole—to hear that she is not encouraging uptake, rather damning it.”

“Once again, the Tories are doing one thing but saying another,” said Sarah Olney, transport spokesperson for the rival Liberal Democrat party. “They say that by 2030 all new cars sold should be electric, yet they’re doing everything they can to put people off buying electric vehicles. Even the prime minister’s climate spokesperson says she doesn’t fancy owning one.”

Of course, the best way to counter misinformation about EVs is to ask someone who actually owns one. The Guardian asked several readers why they prefer driving electric.

“My Tesla Model 3 is my first electric car,” Ric Harris, a computer programmer from Manchester, told The Guardian. “I’ve been a petrolhead since I was 17. I’ve owned cars including an original Mazda MX-5, a 4.5L V8 BMW, I’ve had hot hatches like a Mk2 VW Golf GTI, a VW Corrado, I’ve had a modified Audi TT and a tuned Fiesta ST as well as a bunch of more practical, boring vehicles.”

“I like quick, fun vehicles and I absolutely love the Model 3,” says Harris. “When you sit behind the wheel, in an airy cabin with a glass roof, it feels more like you’re piloting a spaceship than driving a car, which is why mine is named the Heart of Gold after The Hitchhiker’s Guide to the Galaxy.”

“It’s also saving me several hundred pounds a month compared with my previous Mercedes diesel, whilst being cleaner, faster and a much more satisfying place to sit. People talk about ‘range anxiety’ but I’ve found I just tap where I’m going into the satnav and let the car recommend charging stops for me. There are also some excellent apps like Zap-Map and A Better Routeplanner that help you plan routes outside of Tesla’s own charging network. I can’t see me going back to an ICE vehicle.”

“I first purchased an EV back in 2016 as a personal car as I saw my industry would be changing towards them and I wanted to learn more,” said Nicolas Raimo, a used car dealer from Derbyshire. “Within the first 30 days I realised I should have done it years earlier! It was smooth as a Rolls-Royce, as quick as a little sports car, and it only cost me £5,000 at the time for a 12-month-old car.”

“The next car was another EV. Belgium from Manchester was a nice trip via the Eurotunnel,” Raimo continued. “I got fully charged at the tunnel and made it to our hotel in Belgium with no charging, and our hotel had chargers right outside. Frankfurt was a fair few stops from Manchester but at two of the stops the car didn’t need a charge; we plugged it in anyway as I had to stop to pee—I have bladder anxiety rather than range anxiety.”

“I’ve driven EVs for seven years,” Kit Watson, a semi-retired firefighter from Wiltshire, told The Guardian. “I currently drive two electric cars: a 38 kWh Hyundai Ioniq with a range of about 150 miles, and a 10-year-old 14 kWh Mitsubishi iMiEV with a range of 50 miles. I have never run out of electricity, and I have yet to have an electric car set on fire, unlike when I had a fossil car. The practicality of electric cars doesn’t need to be defined by the ability to do Land’s End to John o’Groats [Britain’s longest road trip, analogous to the iconic New York-to-Los Angeles haul in the US]. With electric cars, you should look at what journeys you’ll be using it for every day, and buy accordingly.”

“We have a Kia Niro EV,” said 61-year-old Paul Bloch from Devon. “We’ve just recently driven from south Devon to Fort William in Scotland. We drove about 700 miles over two days. We stopped for a coffee at Gloucester services and topped up the battery for 20 minutes at a 44 kWh charger. That got us to Lancaster for the night. We plugged in to a 7.5 kWh charger in a town centre car park in Lancaster during the evening and that gave us plenty of energy to get to Stirling the next day. In Stirling we stopped for lunch and plugged into a 50 kWh charger in a town car park. Our average cost per kWh was about 15p and we drive around 4.7 miles per kWh, at around 65 mph on the motorway and using air con when it’s hot. What’s the fuss? No fuss!”