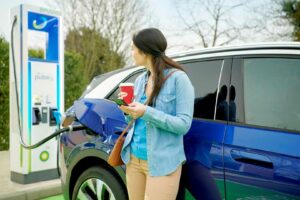 BP announced that it plans to invest £1 billion ($1.3 billion) in electric vehicle charging infrastructure in the UK over the next 10 years.

It’s so far the largest EV-related initiative for the company, which is expected to allow it to triple the number of bp pulse charging points in the county by 2030.

The investment will see bp pulse:

The announcement comes after BP has revealed that fast chargers have become almost as profitable as fuel pumps.

If there are clear signs that the company will be able to profit from the charging network, it seems reasonable to scale up the network, especially since the British EV market is booming.

During the first two months of the year, new passenger plug-in car registrations in the UK, more than doubled. The average market share of rechargeable cars exceeds 22%.

Considering the recent situation in Europe and higher fuel prices, the interest in BEVs and demand might even increase, however we all know that not much can be done on the supply side (actually, production is even more constrained).

An interesting thing for BP will for sure be the rumored opening of the Tesla Supercharging network to non-Tesla EVs in the UK, where the network was often considered as the top in terms of customer satisfaction.