Home » Car Reviews » U.S. Attorney’s Office Would Like to Find This Ferrari F50’s Owner—Is It You?

U.S. Attorney’s Office Would Like to Find This Ferrari F50’s Owner—Is It You? 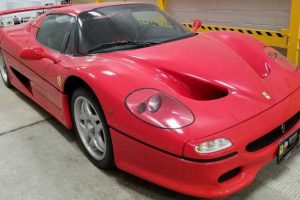 Hey, you? Is this 1996 Ferrari F50 yours? If so, the U.S. Attorney’s Office would like to speak with you. No, it’s not about that parking ticket … they want to give the F50 back to you. Remember how it was stolen 18 years ago? In Italy? The government thinks this is it. But before you raise your hand, know that this is headed to court … there’s another party who thinks they have rightful ownership.

Let’s back up and explain. As The Buffalo News reports, back in 2003, a Ferrari F50 was stolen in Italy soon after it was purchased. Fast forward a bunch of years, and a Ferrari F50 is intercepted at the Canadian border by U.S. Customs and Border Protection. They notice something a little fishy about the VIN plate, and after investigating further—and contacting Ferrari—CBP determines this is the stolen F50 from 2003.

The issue is, in the intervening years the Ferrari has had at least a couple of owners, the last of which claims to have proper ownership. While it seems the evidence is compelling, the Buffalo News relates the U.S. Attorney isn’t sure if it should give the car back to either claimant. It wants these parties—or you, provided you have a stronger claim than the folks identified in the news report—to sort it out in court. Until then, the government is going to hold onto it. Tough job, but somebody’s got to do it.

The story takes more twists and turns in a few hundred words of the original report than we’ve relayed here, and a court battle could reveal even more. It could be that both claimants have less of a right to this F50 than you, dear reader. All you have to do is prove your claim in court. Good luck. You’re going to need it.