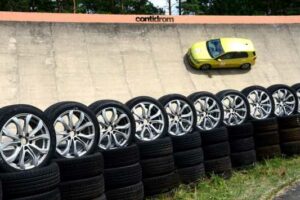 What are the best tyres for your car? We test 10 tyres to see which is best

Just as last year, the Covid-19 pandemic meant we had to make changes to our annual test of the tyres that the majority of UK drivers will use all year round.

Testing summer tyres, as the rest of Europe calls them, is vital for Auto Express and we were determined to ensure you have all you need to know when it comes to choosing the best replacements for your car as mileages return to pre-pandemic levels. Travel restrictions meant we had to change the way we gathered our results, though, and with the help of Continental, all the objective tests were conducted by staff at its Contidrom facility near Hanover, Germany.

With restrictions still in place, we sought the help of an independent tyre tester in Germany, who has worked for many magazines and car makers, to do our wet and dry handling tests. We were also able to back up his results with our own assessment of the tyres once travel restrictions to Germany eased. We also had to change the way that we ensure you buy the tyres that we test. With a serious risk that the test may not take place at all, we asked makers to send tyres with the proviso that we would buy samples of the top finishers to ensure we were recommending production versions. The samples we bought of our top two matched the tyres supplied.

The big-selling 225/45 R17 size was our focus this time around. We last tested these in 2018, when Continental was the winner. Could it do the double with the same PremiumContact 6?

Wet roads are where drivers are most likely to exceed their tyres’ grip, which is why it takes the bulk of our marks.

Timed laps around the Contidrom’s wet circuit are central to the handling test, and we take an average to get the result.

To measure lateral grip, we head to the 60-metre wet circle, where we accelerate until the car starts to push wide. Multiple laps provide an average time.

For the brake test, Contidrom’s rail system ensures the tyres hit the same piece of wet tarmac every time, and we use an average of the distance taken to stop from 50mph.

The rail system is then adjusted to put one wheel in the water, to allow us to measure longitudinal aquaplaning. The car is accelerated through the strip, and the speed of each front wheel is measured. We record the velocity where the one in the water exceeds the other by 15 per cent.

For lateral aquaplaning, part of the tarmac circle is flooded to 5mm. The car is repeatedly driven through it at higher speeds with the lateral force measured.

Lap times are used again to rate dry handling using the long sweeps and turns of the Contidrom circuit. Multiple laps are completed and an average taken.

Dry braking is measured from 100kph (62mph) to a standstill. In the same way as in the wet assessment, several stops are completed and an average distance taken for the final ranking.

While the EU label’s rating concentrates on the environmental impact of external noise, drivers are more concerned with what can be heard in the cabin. Our test was done with a microphone mounted centrally inside and noise levels measured at 100kph driving on smooth tarmac.

Our rolling-resistance assessment is carried out to industry standards and measures the force needed to roll a loaded tyre. In essence, the test measures the difference between the power needed to push a car with tyres at 30psi, then at 10psi. Fuel economy changes by around one per cent for every five per cent shift in rolling resistance.

Our prices include the cost of fitting and are provided by the winner of our online tyre retailer test, Black Circles. They are its prices at the time of calculating the results, or, if a tyre isn’t included in Black Circles’ line-up, what it would charge. Price plays a small role in our overall rating, though.

How we chose a winner

All the test results are converted to percentages to accurately reflect a tyre’s relative performance. Essentially these are added together to get the final result.

The only weighting we do is to ensure that a test where the performance gap is disproportionately large, such as aquaplaning, counts the same overall as one with close results, as seen in dry handling.

The emphasis is on safety, with braking and handling in dry and wet conditions taking the bulk of the marks. Price plays a small role in the overall result.

VON, Bridgestone, Continental, Dunlop and Michelin returned with the same tyre as previously tested, while Goodyear, Hankook, Nokian and Pirelli have new tyres. We added Vredestein to the roster, too.

We had a mix of 91 and 94 weight tyres and speed ratings of W and Y (up to 186mph), while we’ve included the EU tyre label grades, which cover fuel economy (RR rolling resistance), wet grip (WG) and pass-by noise (N).

The first two are ranked A-G, with G the worst, while the latter is in decibels, so the lower the number the better.

Black Circles, our online tyre retailer test winner, provides the prices that we used in this feature. The figures we quote are what the company charged for a fully fitted tyre at the time of writing or, if the product we evaluated wasn’t part of Black Circles’ range, what it would charge for them. We also corroborated these figures against other outlets.