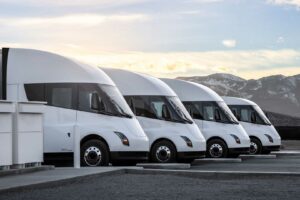 Late last week, on Friday, July 8, 2022, a Twitter user posted a video of a recent Tesla Semi sighting on the freeway. It appears both Class 8 trucks have been updated by Tesla.

In addition to ramping up new factories, expanding existing factories, and making plans for more factories, Tesla has many future products up its sleeve. Sadly, Tesla CEO Elon Musk’s early estimates of when these products might come to market have proven to be ridiculously optimistic.

Tesla plans to bring both the sought-after Semi and Cybertruck to market next year, though people have already been waiting for these vehicles for years. While it appears the Semi has been potentially ready for launch for some time now, and Musk recently confirmed that the Cybertruck design is complete, it simply hasn’t made sense for Tesla to race these EVs to market.

At this point, Tesla is overwhelmed by the demand for its vehicles, and it can’t currently produce enough EVs to get delivery times down to reasonable estimates. Rushing to bring vehicles like the Tesla Semi and Cybertruck to market would likely just push back Tesla’s current delivery estimates even further.

With that said, hopefully as Tesla works to ramp up its new factories in Texas and Germany, it will allow the automaker some wiggle room to begin to get the future models to market. However, there could continue to be many obstacles going forward.

At any rate, EV fan Timothy Williamson was driving on Interstate 80 near Donner Lake in the northeast area of California. He was fortunate to see two Tesla Semis traveling in a caravan.

As pointed out by our friends at Teslarati, the all-electric semi-trucks were headed west. While we have no way to know for sure where they were going, commenters on the tweet suggested that perhaps the Tesla Semis were on their way to PepsiCo in Modesto, which is over four hours (~200 miles) from Donner Lake.

This would come as no surprise since PepsiCo placed a large order for a fleet of Tesla Semis a few years back. We’ve also seen the electric hauler at the Modesto facility, PepsiCo has secured permits for Tesla Megachargers to fast-charge the Semis, some Megachargers have reportedly been installed, and PepsiCo has noted on a few occasions that its first batch of Tesla Semis is expected to arrive soon.