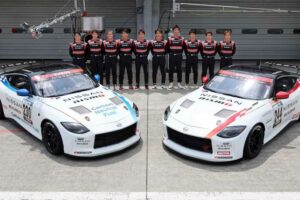 Nissan has officially unveiled the Z race car concept for the Fuji 24-Hour Race, set to happen on June 4 and 5, 2022. But instead of revealing just one race car, the Japanese marque showcases two versions that are backed by different teams.

Announced back in April, the Nissan Z race car concepts are being developed with the knowledge gained over many years of Super GT and customer racing vehicle development. Nismo will also use the accumulated data from participating in the grueling 24-hour endurance race, which will also help further develop the vehicles.

The two Nissan Z race car concepts are called 230 and 244. Race car 230 is backed by the Nismo team and is equipped with a carbon-neutral-fuel (CNF) compatible engine. Meanwhile, car 244 is powered by a gasoline engine and is entered by the Max Racing Team. Car 230 is essential as Nismo will apply what it will learn about the CNF-compatible powertrain, which will be applied to future development.

This is in line with Nissan’s aim of carbon neutrality by the fiscal year 2050, including motorsport. The development of the CNF-compatible engine is targeted toward carbon-neutral motorsports in the future.

Of note, Nissan is the only Japanese manufacturer that participates in the all-electric ABB FIA Formula E World Championship.

“We are the first and only Japanese manufacturer to enter the Formula E World Championship and we are again challenging the norms. The participation of the Nissan Z Racing Concept cars in this demanding race will bring many valuable learnings to develop competitive engines compatible with carbon-neutral fuel,” said Ashwani Gupta, Nissan’s chief operating officer.