Home » Two Dead in Tesla Crash With No One Driving, Report Says

Two Dead in Tesla Crash With No One Driving, Report Says 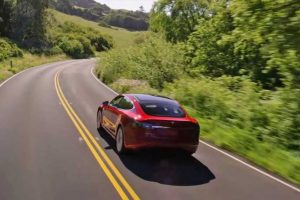 A Houston-area crash took the lives of two men late on Saturday when a 2019 Tesla Model S sedan left the road and crashed into a tree, prompting a battery fire that burned for hours, KHOU 11 reports. News footage showed the burned-out body of the car, which reportedly required four hours and 30,000 gallons of water to extinguish.

What is unusual about this particular crash is that authorities say that no one was at the wheel at the time of the crash, with one passenger seated in the front passenger seat, and the other in one of the rear seats. According to accounts from first responders KHOU 11 spoke to, the vehicle failed to follow a slight curve in the road when needed and left the road, striking a tree at a high speed. First responders did not estimate how quickly the vehicle may have been traveling at the time of impact, or if it attempted to brake at any point.

The circumstances of the crash suggest that the passengers may have been using Tesla’s Autopilot or Full Self-Driving systems. According to several reports of the incident, firefighters gave no indication that a third person may have been involved, or that one of the two victims had been in the driver’s seat at the time of the crash but was relocated by the force of the crash.

“With the physical evidence and the things of that nature on the scene, that night the position of the bodies the trajectory of the impact, they are 100% certain that no one was in the driver seat driving that vehicle at the time of impact. They are positive,” Harris County Precinct 4 Constable Mark Herman told KHOU 11.

One of the victims was 59 years old, while the other was 69. The victims have not yet been identified by name in press reports.

KHOU 11 also reports that firefighters had trouble extinguishing the battery fire, and at one point called Tesla to ask how to put the fire out. It’s unknown whether they had been able to reach anyone at the company, but the fire was eventually extinguished.

Videos of misuse of these systems are not difficult to find on social media, with passengers often filming each other either napping while the vehicle is moving through traffic, or showing an unoccupied driver’s seat as the vehicle travels down a road.

The fact of the battery fire and photos from the crash site certainly suggest that the crash itself was quite violent—battery fires do not occur in all instances of EV crashes, usually only in more severe ones or when the underside of the car is punctured by debris. Tesla and a number of other automakers have disseminated instructions to first responders on putting out battery fires, but it’s still common for fire crews to try several different methods to extinguish a battery fire before letting it burn itself out.

Share your thoughts on this latest autonomous-driving crash in the comments below.