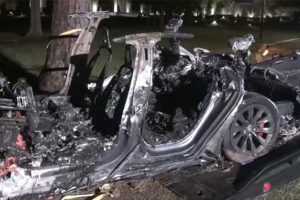 Two men are dead after a Tesla Model ran off the road and struck a tree—an incident capturing attention because authorities believe neither man was behind the wheel of the Model S at the time of the crash. After impact, the vehicle was engulfed in flames and took more than 30,000 gallons of water to put out.

The incident occurred late yesterday in Spring, Texas, a suburb of Houston. According Harris County Precinct 4 Constable Mark Herman, who spoke with Houston television station KPRC 2, the police investigation concluded that neither man was behind the wheel, with one of the men in the passenger seat and the other behind him in the rear passenger seat of the Model S at the time of the crash. The identities of the men have not yet been released.

All Tesla vehicles have Tesla’s Autopilot capabilities, and authorities are investigating the exact circumstances of the crash. The car was reportedly traveling at a high rate of speed when it lost control in a curve, struck a tree, and immediately burst into flames.

Firefighters reportedly battled to put out the burning car for hours as the vehicle’s batteries continued to ignite, which is an issue that can occur wih all-electric vehicles when the battery pack catches fire and spreads to the pack’s separate cells, which can still store energy. At one point Herman told KPRC 2 that deputies had called Tesla for guidance on how to put out the fire. Tesla has said in the past that in the event of a persistent fire to let it burn out. Very little was left of what was reportedly a 2019 Model S once the fire was put out.

Recently, Tesla has rolled out a beta test of what it calls its Full Self Driving (FSD) software, an expansion of its Autopilot system. As Tesla and other automakers have noted repeatedly, these systems are not meant to serve as a replacement for a human driver, who must be able to take full control of the car at any time. It is unclear at this time if the car involved in the crash had the beta system installed.  And in fact, Tesla has started to kick out drivers who have been pushing the limits of FSD off of the test.

Autopilot and other systems such as the General Motors Super Cruise are not fully autonomous systems, but rather driver assist features. Tesla CEO Elon Musk himself has warned in the past of drivers becoming too complacent, which can lead to inattention and crashes.

Tesla no longer has a public relations team to field any questions about the crash. Musk’s most recent Twitter post retweeted Tesla’s own report posted by Tesla Owners Online that Teslas with Autopilot engaged are approaching ten times fewer crashes than cars without it.