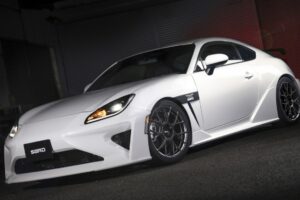 The Toyota GR 86 isn’t even on sale yet in the United States, yet we’re already seeing tuned and restyled versions coming from the usual suspects out of Japan. The latest one is a product of SARD, a tuner and racing outfit specializing in Toyota products. The company is probably most recognizable to Americans as the creator of some race versions of the Toyota Supra in various versions of the Gran Turismo series of PlayStation games. One part of SARD’s business even works on Toyota-powered powerboats. This GR 86, however, is a product of the company’s street tuning arm, and the result looks a bit like a baby Lexus LFA.

This resemblance comes mainly from the deep triangular elements under the sport coupe’s headlights, which replace a set of boomerang-shaped black elements that call this space home on the run-of-the-mill GR 86. A thick, bold panel with the SARD logo sweeps across the top of the front fender vent, while a chunky appliqué adds a wedge-y element forward of the rear wheels, giving a sense of additional body width without actually swelling the fenders (which appear to be otherwise stock, although we can’t be entirely sure since details on this build are limited). At the rear, aftermarket taillights and a new exhaust system with suitably big, bold tips complement a form-fitting carbon-fiber wing.

Whether you think SARD’s work is an improvement on the standard GR 86 is entirely subjective. It is, however, keeping in line with the company’s concept versions of the GR 86’s predecessor, the Toyota 86—particularly the 86 GT3 concept this GR 86 is pictured next to.

We’ve only ridden in the BRZ and GR 86 at this point, although we expect a chance to get behind the wheel very soon. The Toyobaru twins are now powered by a 228-hp 2.4-liter flat-four engine. A manual transmission comes standard, and we expect both cars to be slightly quicker to 60 mph than the 6.6-second estimates of both Subaru and Toyota. Based on our time in the passenger seat, we’re hopeful that Toyota actually fixed some of the things that frustrated us about the last car while maintaining the prior car’s driver-focused nature.