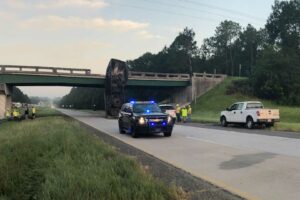 No injuries, but the bridge is destroyed and traffic is a mess.

There isn’t much that can stop a semi-truck on the highway, but a bridge certainly can. That’s exactly what happened early on July 15 according to the Georgia Department of Transportation. A semi-truck pulling a large dump trailer that was raised reportedly struck an overpass on Interstate 16, and the impact was so hard it literally shoved the bridge off its foundation.

Both the Georgia DOT and GDOT East Traffic Twitter accounts alerted motorists of the crash, which happened at 3:00 AM local time according to Georgia Department of Transportation Commissioner Russel McMurry. It’s not clear if the trailer was left in the raised position or if it somehow raised on its own, but the impact pushed the overpass for State Route 86 six feet off its foundation. The bridge crosses I-16 approximately halfway between the major cities of Savannah and Macon. Dramatic photos show just how hard this impact was and frankly, it’s amazing the driver of the semi wasn’t injured.

The trailer is obviously destroyed, but so is the bridge. In a press conference about the situation, Commissioner McMurry stated the quickest way to reopen I-16 was to simply demolish the bridge. Apparently, its construction includes a single beam that spans the highway, which is why the whole thing moved so dramatically. The demolition should be complete with I-16 fully opened as early as July 21. A more immediate plan hopes to have one lane in each direction open this weekend. At present, there is no timeframe for replacing the bridge.

There’s also no mention of possible citations or fines for the driver of the truck that caused this commotion. As it stands, westbound traffic on I-16 will follow a 24-mile detour to clear the seven-mile stretch of closed highway until the damaged bridge is removed. Eastbound traffic will have a 10-mile detour, with both detours designed to ease traffic congestion through two small towns on the detour routes. At least there’s a plan in place to keep things moving during the cleanup process.

We’ve seen a few crazy bridges over the years, and none are ever pretty. At least there were no injuries this time around, but whoa Nellie are these images shocking. Stay safe out there everyone.