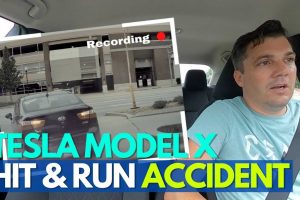 Our friends over at the Trail Less Traveled YouTube channel haven’t been making videos about the new Tesla Model X lately. This is because, before they even removed the brand-new electric crossover’s temporary tags, someone backed into it and sped away, running red lights.

We were concerned for them and shared that it may take some time to get their Tesla repaired. They had heard online that Tesla service can be problematic and it can take a long time to get parts, so they didn’t really know what to expect. They also weren’t sure if this applied specifically to work performed at Tesla’s Service Centers or approved third-party repair shops.

Regardless, thanks to Tesla’s built-in multi-camera Sentry Mode security feature, the repair would be completely covered by the other driver’s insurance company.

The Model X went to a local collision repair shop where the family was told it would take just over a week. This was pretty promising, though the shop did say it’s sometimes an issue to get Tesla parts quickly. The repair took a bit longer than anticipated since the shop had to wait a few extra days for parts. However, there was another hitch that held things up a bit longer.

When a Tesla vehicle gets hit in the front end, the Autopilot cameras and sensors must be replaced. Once the new parts are installed, Tesla has to inspect and configure them. So, they had to contact Tesla, which proves difficult in many cases, and set up a time for someone to come out. Rather than trying to reach the company in traditional ways, Steve used the app and scheduled Mobile Service to show up, which was a very smart move.

The Model X is repaired and back in action now, so we’ll have more camping and towing coverage coming soon. Check out the video for all the details. Then, share your Tesla repair stories with us in the comment section below.