Home » Car Reviews » Toyota's Upcoming Crown PHEV Will Be Sold In The US, Says CEO 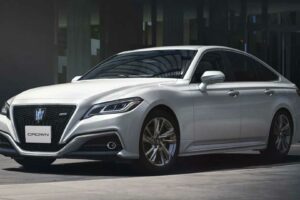 The 2023 Toyota Crown was just unveiled earlier this year. According to an earlier article published by Autoblog, Toyota wasn’t planning on bringing an electric Crown to our shores, which may have been sad news for some folks. However, Toyota CEO Akio Toyoda shared more information with Motor Trend at a recent event, reportedly stating that Crown will come to the US with an available plug-in hybrid electric vehicle (PHEV) configuration.

This should come as no surprise to people who have been following Toyota’s EV plans. The company has made it clear time and time again that it doesn’t believe people across the globe are ready for fully electric cars. Moreover, the company’s CEO has said on a number of occasions that Toyota aims to offer vehicles with multiple powertrain options so that consumers can decide for themselves which version suits them and which they can afford.

Autoblog notes that Reuters pointed to inside sources in April 2022 who said Toyota would bring a Crown PHEV and a fully electric version to the market next year. However, it was said these electrified crossovers would be reserved for the Japanese market. Now, it seems the automaker has changed its plans, and will sell the Crown globally, but we don’t yet know if there will eventually be a fully electric version available on our shores.

Since the news just came from Toyota’s CEO at a conference in Las Vegas, there is no official announcement. For this reason, there’s also little information about the Crown’s potential PHEV powertrain. Toyota currently offers the Prius Prime (PHEV) hatchback, which has been on the market for a number of years, and the newer RAV4 Prime (PHEV) compact crossover, which arguably has much more impressive EV tech than the latter.

Sources have shared with Autoblog that the Crown will come in a Hybrid Max configuration, which is said to be the sportiest option, cranking out some 340 horsepower. The Prius Prime and RAV4 Prime both outperform all other versions of the cars, but the Prius Prime isn’t quick or powerful. While the RAV4 Prime is a solid performer, making a potent 302 horsepower, no current electrified Toyota makes 340.

Lexus’ new 2023 RX Hybrid midsize SUV makes 367 horsepower, but it doesn’t plug in. The luxury automaker will bring a PHEV version of the new RX to market later in the model year. However, it will use the same powertrain as the 302-horsepower RAV4 Prime and Lexus’ smaller NX PHEV.

We’ll have to wait for Toyota to release more official information about the upcoming Crown crossover. While it seems it will eventually come to the US with a plug-in option, we don’t know when, and we know nothing about its powertrain. Moreover, we wonder whether a fully electric version will also eventually makes its way to our shores.