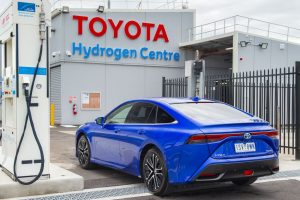 Toyota has commissioned its first hydrogen production, storage and refuelling facility in Altona, west of Melbourne in Australia where up to 80 kg of hydrogen can be produced per day, according to the manufacturer. The Altona plant was home to the automaker’s production of Camry, Camry Hybrid and Aurion models, which came to an end in October 2017 after the decision was announced in 2014.

Now, the Hydrogen Centre forms part of a larger Centre of Excellence. Toyota Australia invested AUD4.3 million (RM13.5 million) into the development of the facility in 2019, with Australian Renewable Energy Agency (ARENA) investing AUD3.1 million (9.8 million) into the hydrogen production facility at the time.

The hydrogen production facility employs an 87 kW solar power array that harvests the electricity required for to 200 kW electrolyser, which splits water into its hydrogen and oxygen components. The electrolyser can operate a variable capacity between 30% and 100% in order to make the most of available solar-generated electricity, enabling the plant to be fully carbon-neutral, says Toyota.

During the electrolysis process, oxygen is dispersed into the atmosphere and hydrogen is captured and stored in a 45 kg (18,000 litre) tank at low pressure, or three MPa. The hydrogen is then compressed and stored in medium- and high-pressure tubes at 50 MPa and 90 MPa with maximum capacities of 75 kg and 56 kg respectively, according to Toyota.

Hydrogen is then fed to the refuelling station that can dispense at medium pressure (35 MPa) for machinery such as fuel-cell forklifts, and at high pressure (70 MPa) for passenger vehicles such as the second-generation Toyota Mirai. Hydrogen produced at the facility also powers a 30 kW fuel-cell power generator for the Hydrogen Centre’s back-up electricity, and also feeds back into the main electricity grid.

The second-generation car employs three tanks for storage of hydrogen, which enables a range of up to 850 km, up from the 650 km previously offered by the first-generation Mirai which featured two hydrogen tanks. The Mirai can also serve as a supply of electricity through two different means; the first is by connecting the car’s external power supply outlet to an external DC power supply.

Configured thus, it can supply a maximum of 9 kW DC. A more direct, AC path feeds 100 volts at 1,500 watts through two accessory outlets for electric devices. This can power an average household in Japan for four days at an average consumption rate of 400 Wh. said Toyota.