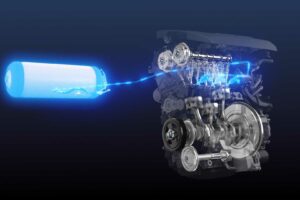 The transportation industry is currently undergoing its biggest transition since the internal combustion engine replaced the steam engine because of its higher thermal efficiency. Will we switch to battery-powered electric vehicles or fuel cell EVs – only time will tell which technology will prevail. However, it seems that many automakers are not ready to let the ICE go and will invest in alternative fuels to make it more efficient and greener.

Joining those companies now are Toyota, Subaru, Suzuki, and Daihatsu, together with ENEOS Corporation and Toyota Tsusho Corporation, which established a new research association on July 1 this year. It will focus on ways to optimize the process of producing fuel, making it less polluting and more effective. The joint project is called the Research Association of Biomass Innovation for Next Generation Automobile Fuels.

An official press release distributed by the involved companies clarifies that the research association will work on promoting technological research on the use of biomass. Also, the project will study efficient ways of production of bioethanol fuel through the circulation of hydrogen, oxygen, and CO2. The association will design, install, and operate production facilities for bioethanol.

Another area in which the new association will work is research on the by-product oxygen, which has a high concentration during hydrogen production. The CO2 generated during bioethanol production is also going to be researched. Last but not least, it will also develop a system that proposes optimal cultivation methods for maximizing yield and optimizing crop components to secure raw materials for bioethanol fuels.

Just recently, Porsche invested $75 million in HIF Global LLC, a Santiago de Chile-based company that develops synthetic fuel production facilities. For now, the Stuttgart-based automaker intends to use the green fuel in motorsport but will eventually experiment with production vehicles, too. Lamborghini also sees potential in synthetic fuels to keep the internal combustion engine alive after 2030.