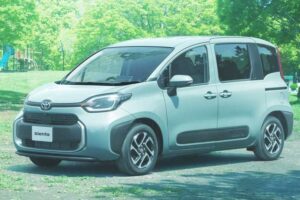 The Japanese automotive market is unlike any other in the world dominated by small cars that fit the country’s narrow roads. Joining the rather colorful local car scene is a new generation of a seven-seat model from Toyota, which has been on sale since September 2003. The Sienta is a cute-looking mix between a minivan, a light commercial vehicle, and a crossover and it has just entered production in Japan.

The team that worked to develop the vehicle considered customer feedback when making decisions about the overall concept of the new Sienta and eventually reached a conclusion to preserve the high roof length and keep the model’s affordable price. The recipe was supplemented with new safety features and an improved fuel economy, as well as a more refined interior with new convenient features.

As a result, the length and width of the vehicle remained unchanged, but the cabin height has been increased and Toyota says there’s now enough room in the cabin for seven grownups to sit comfortably. This may be a little too optimistic given the dimensions of the Sienta, though the firm also says the legroom and headroom on the second row of seats have been improved thanks to a new design of the seats.

If you take the driver’s position, you’ll be treated to a modern dashboard with a digital instrument cluster and a new infotainment system with a display on the center console. There are physical buttons for the climate system and a number of cupholders and sockets for small items. The passengers at the back can enjoy the newly designed air circulation system with air vents integrated into the ceiling. Sunshades on the rear sliding doors make sleeping during long journeys more comfortable.

Power comes from a 1.5-liter hybrid engine mated to a CVT with simulated gears for “fun shift changes with the feeling of a manual.” Toyota promises the electrified powertrain delivers an impressive fuel economy of approximately 5.5 liters per 100 kilometers (43 miles per gallon) measured by the WLTP cycle. There’s also a base 1.5-liter gas engine, as well as an all-wheel drive variant of the hybrid.

The automaker expects to have the new Sienta at its dealers in Japan early next month and estimates it will sell about 8,300 units per month. Prices start at $14,190 for the base FWD model and can reach up to $22,615 for the range-topping AWD hybrid model.