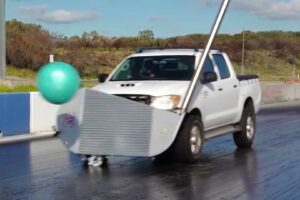 Golf carts aren’t anything new. They have been used on golf courses and in retirement communities for years, but a golf club car is certainly new. The oddball creation comes from the How Ridiculous YouTube channel, which fastened a car-sized golf club – a nondescript iron – to the front of a Toyota Hilux, including the oversized shaft. The goal is to see how far the modified pickup can hit various-sized balls down a quarter-mile drag strip.

That sounds like some dumb fun. The oversized golf club looks ridiculous attached to the front of the Toyota, but it looks like a real golf club nonetheless. It attaches directly to the truck’s chassis, with corrugated steel giving the iron the properly ridged clubface. The channel puts the club through a few tests – hitting a water balloon and watermelon – before letting the games begin.

The name of the game was simple – see how far the car could launch the balls. Projectiles included in the test were a football, rubber ball, baseball, volleyball, basketball, soccer ball, golf ball, tennis ball, and rubber band ball. Unsurprisingly, the game didn’t go as smoothly as you’d expect. The big rubber ball completely left the track, its large surface area instantly slowing it down once it caught some air. It flew off into the grass at the shortest recorded distance – 70 meters (229 Feet).

In another instance, the Hilux put itself in limp mode, limiting the truck’s speed when it collided with one of the balls. The one that went the furthest was the rubber band ball, which launched a stunning 332 meters (1,089 Feet). It cruised far past the second place golf ball, which reached 283 meters (961 Feet). The video doesn’t prove anything other than that it’s possible to make a golf club car, though this could be a proof of concept for a new sports league.