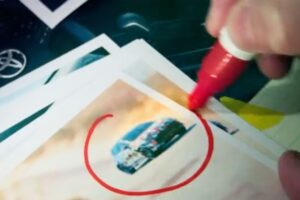 The incoming GR Yaris-powered hot hatch, which won’t be coming to Europe, has been teased for a final time

The relentless teaser campaign for the Toyota GR Corolla is continuing, with Toyota releasing a new social media video titled ‘The Detective’ ahead of the hot hatch’s imminent reveal.

The titular sleuth can be seen analysing previous GR Corolla teasers for clues, so absorbed in the task he doesn’t notice the car driving past behind him. We don’t get a clear look at it, but in any case, there isn’t long to wait until the new VW Golf R rival is seen in full. Earlier this week, Toyota confirmed the GR Corolla will be revealed in the early hours of 1 April UK time.

That announcement’s accompanying teaser video revealed several of the car’s details. These included a sizeable front wing brake duct – next to which is a GR badge – plus a GR-branded red brake caliper under a multi-spoke gloss black wheel, and an embossed ‘GR-Four’ logo. The latter element suggests the use of the GR Yaris’ all-wheel drive system.

The Toyota GR Corolla won’t be coming to the UK, however, a Toyota GB spokesperson confirmed. One reason for this could be Gazoo Racing’s ‘Power of Three’ ethos, which involves only three GR models being sold in one market at the same time. In Europe, we already have three – the GR Yaris, the GR Supra and the new GR86. In North America, the lack of GR Yaris provides a ‘space’ for the hot Corolla.

Earlier this month, Toyota gave us a glimpse of the forthcoming GR Corolla hot hatchback in a new video advert for the GR86.

The GR Corolla is briefly seen parked in the background of an abandoned shopping mall as the new GR86 drives past in front of it. While the video doesn’t reveal much about the car, there is a similar GR livery to the pre-production versions of the Supra, GR86 and GR Yaris.

A rear shot at the end also gives a few more clues. As the car’s engine burbles into life it’s possible to spot a subtle rear spoiler and a rear light cluster that’s the same design as the standard Corolla.

Expected to go on sale in 2023 – the GR Corolla is tipped to be powered by the same 1.6-litre turbocharged three-cylinder petrol engine found in the GR Yaris. An earlier teaser image from last year revealed GR Corolla’s interior, including an instrument cluster showing “G:16” where the time would usually be shown. It is understood that this is a reference to the GR Yaris’s G16E-GTS engine code for its turbocharged three-cylinder unit. The power figure could also be more than the GR Yaris’s 257bhp with the Corolla’s climate control dials showing 2, 6 and 8 – the same as the 268bhp Japanese-market GR Yaris.

The Corolla’s sat-nav showed the car next to a road named “GR Four”. This all-wheel drive set-up uses limited-slip differentials on both the front and rear axles, combined with an electronically controlled centre differential.

An automatic gearbox was also shown – it’s thought that this will be the only transmission option available. Meanwhile, Toyota is working on an automatic GR Yaris, which will presumably use the same transmission as this hot Corolla.

There’s not been a high-performance Toyota Corolla since the T-Sport of the early 2000s, which delivered 189bhp from its supercharged 1.8-litre engine, so the promise of a new GR Corolla is a bold move from Toyota, especially given its direct rivals in the USA will range from the Volkswagen Golf R to the new Honda Civic Type R.