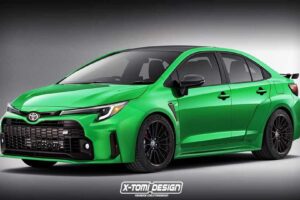 Toyota isn’t ruling out adding a sedan to its GR performance vehicle lineup. An electrified model is possible, too.

Toyota Motor North America Executive Vice President of Sales Bob told Motor Trend to “stay tuned” when asked about the GR sedan. He didn’t offer any additional details to provide any hints about the model.

The brand only offers four sedans in the US, so there aren’t so many options for the GR model. The Corolla hatchback already has a sporty version, so expanding the offering to a four-door might make sense (rendering above). The Camry and Avalon already are available as mildly performance-focused TRD models, but a GR variant could add even more speed to them. Since it’s only available in California, a hotter Mirai seems very unlikely because the market for the vehicle would be so small.

The GR GT3 debuted at the 2022 Tokyo Auto Salon as a sharp-edged sports coupe. The company didn’t offer any powertrain details about the vehicle at that time.

Later, Toyota Racing Development President David Wilson suggested that the next-gen Lexus RC was going to take styling cues from the GR GT3 concept. “It’s fairly safe to connect the dots and suggest that that could be a precursor to the next global GT3 car for Lexus,” he said earlier this year.

Erickson also talked about the GR brand’s future. “Electrification coming to GR is something we’re talking about. In the long term, what is the best way to deliver what GR is and what does electrification have to do with that,” he said. Erickson noted it would be years rather than months before the arrival of these models.

The Corolla GR will arrive in the US later this year, but the hot hatch’s lineup gets even more exciting during the 2023 calendar year. That’s when the Circuit Edition with tweaks like a carbon-fiber roof and the stripped out Morizo Edition arrive.