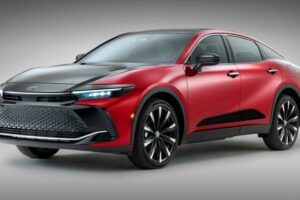 The Toyota Crown isn’t even out yet, and yet we’ve just learned that the hybrid-only, lifted-like-an-SUV sedan replacing the now-defunct Avalon will be getting a plug-in hybrid (PHEV) to join two other non-PHEV hybrid powertrains. The news came from an interview with Toyota President and CEO Akio Toyoda himself during the automaker’s dealer meeting in Las Vegas this week.

The Crown’s entry-level option is much the same as the RAV4 Hybrid, with a  2.5-liter I-4 engine with dual electric motors powering the front wheels, along with a third motor independently spinning the rear axle. Final figures are forthcoming, but expect about 236 hp. Above that, and intended as the sportier option, is a similar trio of electric motors (again, two up front and a third on the rear axle) but working in concert with a more powerful turbocharged 2.4-liter I-4 gas engine. This arrangement seems to be borrowed from the also-new-for-2023 Lexus RX500h hybrid luxury crossover. Expect about 340 hp and 400 lb-ft of torque.

Details on the plug-in hybrid version of the Crown are elusive at this point, but Toyota is beating the drums of sportiness when talking about the Crown, insisting the top-level pure hybrid model’s 340-ish hp makes it fun to drive and totally unlike the dead Avalon. Given that positioning, we have to imagine the brand would try and give the plug-in model more power to highlight its station in the lineup. Plus, in every other Toyota model, the plug-in hybrid (dubbed “Prime” in Toyota-speak) represents the top of the range. The only trouble is, we’re not seeing a plug-in powertrain in service in any current Toyota or Lexus that puts out more power than the Crown’s top hybrid setup. The new RX450+ plug-in hybrid delivers about 300 hp, which would plop it between the base and top-level Crown hybrids. That SUV also is capable of about 30-some miles of EV-only driving.

It’s now up to Toyota to sort out those details—and, who knows, maybe it will settle for a lower-output Crown Prime so long as it delivers some EV-only range—because for now, all we know for sure is that a Crown PHEV is happening.