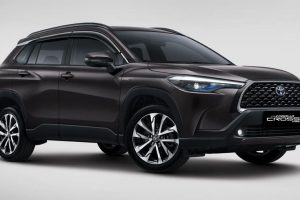 Less than a month after the Toyota Corolla Cross was revealed in Thailand, the C-segment SUV has now made its way to Indonesia. The car arrives there in just two variants – one petrol, one hybrid – with similar equipment levels for both models.

Under the bonnet sits one of two engine options, both displacing 1.8 litres. The petrol model features a 2ZR-FE Dual VVT-i naturally-aspirated four-cylinder that produces 140 PS at 6,400 rpm and 172 Nm of torque at 4,000 rpm, mated to a CVT.

As previously reported, the Corolla Cross shares little with the namesake sedan. While it rides on the same C variant of the Toyota New Global Architecture (TNGA-C), it uses a torsion beam at the rear compared to the more advanced double-wishbone suspension of the Corolla and even the smaller C-HR.

It also bears little resemblance on the outside, where the Cross looks more like a RAV4, albeit with softer, more rounded lines. It does share its dashboard, centre console and top-mounted infotainment system with the Corolla, however. The Cross measures 4,460 mm long, 1,825 mm wide and 1,620 mm tall, with a wheelbase of 2,640 mm. Standard equipment includes LED headlights and fog lights, 18-inch two-tone alloy wheels, keyless entry, push-button start, dual-zone climate control, a power moonroof, a nine-inch infotainment touchscreen, and a reverse camera. Just like on the Malaysian-market Corolla, the Cross’ discrete double-DIN head unit has a housing that sticks out from the top of the dash, which contrasts with the floating touchscreen of an OEM unit.

With Thailand and Indonesia already receiving the Toyota Corolla Cross, could Malaysia be next to get it in the coming months? It would be quite a packed remainder of the year for local distributor UMW Toyota Motor – the facelifted Hilux is open for booking and the teasers have apparently already started for the GR Yaris – but one can dream, right? Sound off in the comments section after the jump.