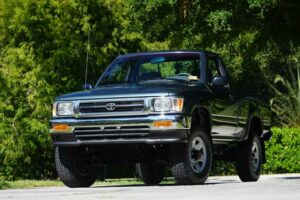 The Ford Maverick and Hyundai Santa Cruz are off to a good start. Despite the chip shortage and supply chain challenges, the two small pickup trucks are flying off dealer’s lots, and some customers have even experienced dealer markups given the high demand. The favorable return of the compact pickup truck is under high scrutiny at Toyota, as the Japanese automaker is looking at the possibility of introducing a small unibody pickup of its own to compete against the Maverick and Santa Cruz.

In an interview with MotorTrend during a Toyota event at the company’s Texas headquarters, Bob Carter, executive vice president of sales for Toyota Motor North America, and Cooper Ericksen, group vice president of product planning and strategy, said they are looking at the compact pickup segment, and hinted we could be seeing a new product in the future.

“One of the spaces we’re looking at—that won’t be short-term—is where the compact pickup truck is going. You have Santa Cruz and Maverick on the market, and it will be interesting to see Scout. Today, we have the market really well covered with Tacoma, but that [a compact pickup] could be a possibility and something we continue to look at,” Carter said. He’s right about Tacoma, which stands as the best-selling midsize pickup truck on the market—and also grew up from its original size class decades ago: A compact pickup.

Cooper added that they key is identifying what the customer wants and then finding a solution. “If there’s a customer that needs a rugged, smaller body-on-frame vehicle, we can consider that, but if it’s more for urban use and less extreme off-road, then it would make more sense to use the TNGA unibody platform,” he added, mentioning Toyota’s newest component set that sits beneath everything from the Corolla to the Camry to the RAV4 crossover and more.

While Carter emphasized that Toyota won’t have anything for the 2023 year model, we could see a small pickup truck for 2024 or 2025. “Chances are we may have HQ Confidential 3 [in June] next year, so we’ll have other things to talk about,” Carter said. “It will be worth the trip,” Ericksen added.

Having a small compact pickup could be a safe bet for Toyota. With the flexibility of the TNGA platform, the development cost wouldn’t be as high, which means it will be affordable, and with its long list of hybrid powertrains, Toyota’s small pickup would put up a good fight against the Maverick (with its standard hybrid powertrain) and Santa Cruz (which could receive a hybrid variant spun off the Tucson Hybrid). Toyota’s mini truck likely would share its version of the TNGA platform with the Toyota RAV4 and Toyota Venza, and could have the flexibility of offering gas, hybrid and even plug-in hybrid powertrains.

Toyota is no stranger to small trucks. The original Toyota Truck was known for its mini shape, reliability, efficiency, and simplicity. But as customers’ demands changed and safety regulations got stricter, the Toyota Truck lost its compact shape. The new truck, however, could bring back all those charms, along with Toyota’s potent reputation for building rugged, reliable pickups.

While Carter and Ericksen didn’t mention any potential names, we could see Toyota resurrect an old vehicle name for its mini truck if it arrives to the U.S. Some of the names we’d love to see are T-100, Stout, or Hilux. One cute option? “Toyopet,” a name which adorned a line of Toyota’s earliest vehicles, including a small sedan delivery and a pickup.

We’ll make sure to circle back with Mr. Carter and Mr. Ericksen next year, and we’ll keep you updated if we hear anything about Toyota’s small truck.