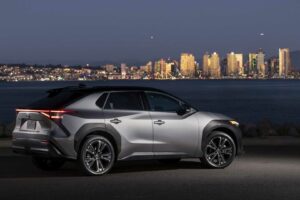 California just recently decided to ban all new gas car sales from 2035. This type of plan to curb climate change is happening across the globe, so it comes as no surprise California is following suit, and other States are also getting on board. However, Toyota CEO Akio Toyoda is among a growing list of critics of such plans.

Late last week, Toyoda shared with reporters that it will be difficult to achieve electric car targets like California’s. He believes that there simply aren’t yet enough people who want a fully electric car. He has said in the past that Toyota will produce the vehicles people want, so that consumers should continue to have options. The CEO said last week:

According to Automotive News, the CEO spoke about California’s plans to ban new gas car sales by 2035. He said, “Realistically speaking, it seems rather difficult to really achieve that.” He mentioned the hurried pace of some automakers, adding that Toyota has no plans to rush to an all-electric lineup like some of its rivals.

The Toyota CEO went on to say that just having 50 percent of new car sales be zero-emission cars by 2030 will be very difficult. This comment was in reference to the Biden administration’s long-term goals. The CEO once again warned that governments should be careful not to limit the type of vehicles people are able to buy.

Toyoda explained that the automaker serves some 200 countries across the globe. This means it has to keep a close eye on market conditions and consumer needs. Some 1 billion people simply don’t have reliable access to electricity.

The CEO went on to talk about hydrogen as a good solution, which has been something Toyota has stood behind for years. Even after most companies have left fuel-cell plans behind, Toyota is still pushing forward. Toyoda also touted the brand’s hybrids, noting that it would be possible to produce eight 40-mile-range plug-in hybrids for every 320-mile fully electric car. He noted that this would be a better way to reduce carbon emissions.

Automotive News reminds us that Toyota invested billions last year as part of a plan to electrify its lineup by 2030. Toyota says that by the end of the decade, about one-third of its total global sales will be fully electric vehicles. It will launch 30 EVs by 2030. Meanwhile, Lexus, Toyota’s luxury division, will have an entire lineup of EVs by 2030. Lexus aims to sell only battery-electric vehicles in China, Europe, and North America by 2035.