Toyo Tires Airless Tires Close In On Reality Despite Challenges 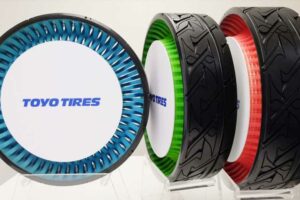 Airless tires have been in development for vehicles for nearly two decades. While airless tires have been fitted to anything from wheelbarrows to bicycles and even to heavy equipment, this technology has yet to hit the road or become a production part for your vehicle. With the acceleration of EVs coming to market, tire makers such as Toyo Tires are looking to push airless tire technology (dubbed “Noair”) out to meet the needs of more efficient tires for these electrified vehicles. Still, production comes with some challenges.

Why Airless Should Matter To You, EV Owner or Not

It shouldn’t need much explanation on why an airless tire would be a huge advantage for the automotive industry and the motoring public at large. A tire that never needs to be filled with air, never goes flat when punctured, and can still ride as comfortably and handle as well as an air-filled one is a holy grail of high-efficiency in vehicle development. Basically a tire that needs no maintenance is one that is more fuel and energy efficient for any vehicle, electric powered or not. While airless tire manufacturers rely on foam inserts for things like bicycles or even solid rubber tires for heavy construction equipment, those in the automotive industry have focused on utilizing plastics and fiberglass composites to create the tire’s support structure—essentially, the part that used use air pressure. These material changes result in a tire that uses less rubber, according to Toyo Tires.

A consistent tire also means one other important aspect that EVs need to consider, “In terms of efficiency,” explained Toyo Tires, “since batteries are used instead of engines, it is important to extend the cruising range, which requires reducing the rolling resistance of the tires.” As your tires lose air, they become flatter and more tread hits the road. This widening of the tire tread creates more traction in a high performance car, but it also leads to higher rolling resistance of the tire. This drops a vehicle’s efficiency dramatically, as the U.S. Department of Energy estimates that 4-11 percent of energy used in internal-combustion-engine (ICE) vehicles is used to overcome rolling resistance. For EVs, that number jumps to as high as 25 percent and means that airless tires will be a critical component for maximum EV energy efficiency.

Of course, EVs being heavier means developing an airless tire for them can be even more challenging than creating one for a regular vehicle. “With EVs,” explained Toyo, “the engine is replaced by a motor and the weight of the battery is also added, the load-bearing capacity increases accordingly. It means that it’s necessary to improve the durability of the tire.”

If a tire manufacturer can figure out how to make a tire more durable and work with EVs, the gains in energy efficiency and range will be rather drastic. Again, referencing the U.S. Department of Energy, just a 10 percent reduction in rolling resistance will net a gain of 3 percent in energy efficiency.

Rubber Tires That Are Carbon Neutral

“Compared to pneumatic tires, airless tires use less rubber,” Toyo told us, “and we feel that airless tires have the potential as an initiative toward carbon neutrality.” Toyo’s goal, however, is to get away from thermosetting resins—like what’s typically used in fiberglass—to thermoplastic resins—like what you typically see used for your daily plastic hardware. While you might think of these plastics as brittle, because the first thing you thought of was probably that plastic “silverware” you hand out during cookouts, thermoplastics are very durable. They come with another bonus over most composites.

We know what you’re thinking, plastics use oil in production and Toyo just said they wanted to be carbon neutral. This is the biggest advantage to thermoplastics: they can be recycled far more easily than composites. “Specifically,” said Toyo, “it is necessary to further develop technologies to realize the switching of materials from thermosetting resins to thermoplastic resins from the viewpoint of reuse and recycling of spokes by retread technology.” There is a bit of a catch, however, but it’s not in the use of thermoplastics in of themselves. As Toyo explained, “Since the production method is fundamentally different from that of pneumatic tires, a large investment in production facilities is expected for production.” If they want to use thermoplastics for their airless tires, they must invest in the additional machinery required to produce those parts. Toyo is already considering this and is looking to make an automated process that matches what they have developed in their laboratory.

Once airless tire production does begin at Toyo Tires, the first market will be Japan and only for small EVs, then it will expand its airless tire into global markets. However, that Japanese release comes with its own challenges outside of production. According to Nikkei Asia, “Japanese safety standards are based on conventional tires and do not allow airless tires on public roads.” Due to this, Toyo aims to initially sell airless tires for golf carts and other vehicles used on private property in Japan. Until that safety standard is changed, airless tires for use on public roads in Japan will stall and, potentially, we won’t see an airless tire from Toyo on an EV for some time. Hopefully, as Japanese automakers continue to push out their own EVs, the Japanese government will act accordingly and modify their standards to work with airless tires. If not, the “Land of the Rising Sun” will fall far behind on a critical part of EV production.