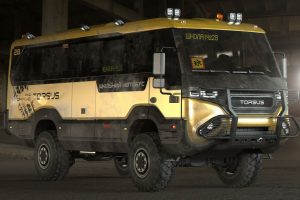 School buses are pretty straightforward things, but this one is a little more complicated. What you’re looking at is the Torsus Praetorian School Bus, and it is “intended for the toughest school run routes in the world.”

Built on an upgraded heavy-duty chassis from MAN, the School Bus is powered by a 6.9 litre six-cylinder turbodiesel engine that puts out 290 PS (286 hp) and 1,150 Nm of torque. Drive is sent to all four wheels via a ZF-sourced nine-speed transmission (available in manual and automatic forms) and a four-wheel drive system with front and rear locking differentials.

Its top speed is limited to 100 km/h, but that’s not really a concern because the School Bus is all about dealing with difficult terrain. With approach and departure angles of 32 and 36 degrees, 340 mm of ground clearance, along with the ability to wade through water up to 900 mm, you won’t be left wanting in the off-roading department.

Inside, the School Bus can carry up to 35 children and the seats have been styled around mathematics and science designs, with optional features including a foldable armrest and hip support bar on the aisle side.

They also get a polymer protective coating so they are easy to clean, which is useful when dealing with the mess left behind by little humans. Meanwhile, large side windows ensure passengers get a good view of whatever they are passing on their way to class, be it some scenic hills or something more extreme like a volcano.

The School Bus is just one of many variations offered by the Czech-based firm, as there’s also versions of the Praetorian meant for mining, evacuation, safari, policing and even the military. The company didn’t reveal pricing for its school bus, but the standard Praetorian starts at 153,000 euros (RM749,336) and goes up to 368,000 euros (RM1.8 million) for the Expedition model.