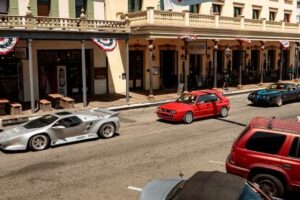 Everyone remembers them, you probably had one growing up (possibly still do)—a Lamborghini Countach poster circa the 1980s. The Countach is a dream car unlike any other, adorning more walls and inspiring generations of automotive enthusiasts all over the world. But everyone knows it’s a piece of crap. Never meet your heroes, kids, you’re often disappointed. Is that always the case? The Top Gear America hosts beg to differ and the producers aren’t going to make it easy on them, so they’re back at Thunderhill Raceway Park to find out if dream cars are more than just poster art.

Related: Is your dream car a state-of-the-art million dollar hypercar, or a rusty old project car waiting for a restoration? No matter what kind of cars you dream about, the MotorTrend App has something to suit your fantasies. Take advantage of the Father’s Day Deal until June 30, 2021, and get one year of all the best car shows for only $3 a month!

Dream cars aren’t always the flagship models of boutique Italian sports car makers. Take the  Top Gear America hosts for example: Right off the bat, Rob Corddry has a polarizing vehicle in this category, a 1979 Pontiac Firebird Trans Am. Eccentric as always, Rob, but that’s why we love you. Dax Shepard is a little more mainstream, but still threw his signature curve ball with the discerning connoisseur’s choice, a 1993 Vector W8. Jethro Bovingdon splits the difference—with his own spin, of course—a race-bred homologation special, multi-championship winning…hot hatchback? That might be an insult to his 1992 Lancia Delta HF Integrale, but it does have a hatch out back and those flared fenders are definitely hot.

What Makes a Dream Car?

TIme and place. It’s as simple as that. There’s always that “aha!” moment, when a budding gearhead lays eyes on a car that sets them on their unique vehicular adventures. For this editor, it was trying to covertly play with the 1/18-scale diecast model of a red 1992 Dodge Viper RT/10 Roadster his father kept on the desk as a young boy. The Top Gear America hosts were all young when they first laid eyes on their dream cars, all at the perfectly impressionable age when people start to come online as individuals.

To some, the Pontiac Trans Am was a car for the masses, something achievable to most and thus not aspirational. But for a young Mr. Corddry, it was the chosen ride of the Bandit, Burt Reynolds. If Burt liked it, it had to be cool. And, there’s just no better factory graphic in history than the flaming chicken sported on these performance-oriented Firebirds.

Dax Shepard, having previously professed love for multiple dream cars—the aforementioned Lamborghini Countach, the Fox body Mustang GT, and the Chevrolet Corvette—doubled down on his car guy cred with a super deep cut. Only 17 Vector W8s were made and even avid car enthusiasts shouldn’t be too embarrassed about confusing this American-made supercar for one of its Italian contemporaries.

Jethro’s choice makes perfect sense. The Delta HF Integrale is one of the most successful rally cars of all time, winning six consecutive championships from 1987 to 1992. While rally racing in the Americas has a decent following, Europeans can’t get enough of it. Naturally, the British professional car racer/automotive journalist who grew up in a family of mechanics would gravitate towards the giant-killing thoroughbred race car for the street.

Regular Car vs. Dream Car: Can You Live with Your Hero?

Pedantic naysayers who’ve done their research are quick to point out that a modern compact sedan with no sporting intentions to speak of is faster than a classic Ferrari. What’s worse, modern poster cars like the 2020 Honda Civic Type-R pull double-duty as transportation appliances with eye-catching-styling,  gobs of performance, affordability, reliability, and general  useability. The Honda Civic Type-R is better in every way than a 1966 Ferrari 250 GT California—on paper, at least.

Sure, the Civic will beat the Ferrari to 60 mph, then trounce on it on the way back to zero. It can turn better, has a higher top speed, is way more comfortable, and is less than one percent the current cost of a classic Ferrari California. Let’s not even get started with maintenance or insurance costs. Rob’s Trans Am only made 190 hp in 1979, and that’s from a 6.6L big-block V-8! The least powerful engine in a Toyota Camry, today, makes 203 hp with only 2.5L and half the cylinders. But Rob Corddry isn’t your average car enthusiast and he appreciates the Pontiac for more than its (lack of) performance.

The Vector W8 started the trend of aeromotive styling, even going as far as using all aircraft-style electronics inside the cab. The design was revolutionary at the time, using a semi-aluminum monocoque with an aluminum honeycomb floor pan and carbon fiber and kevlar body panels epoxy bonded and fastened together with 5,000 aircraft rivets. The 2,700-pound car made 625 hp in 1993 and Vector claimed a top speed of 242 mph! But you need to be a contortionist to get into it, vintage supercar air conditioning systems are famous for being useless, and all the best wedge-shaped cars have a common problem—rear visibility. plus, for nearly $500,000 in 1993, you’d think they could have used a better transmission than the TH425 three-speed auto from a Buick.

There’s nothing wrong with the Lancia. It seats four people, it’s still quick by modern standards, it looks great; this is all assuming you’re okay with the inherent idiosyncrasies involved with owning a classic Italian car. Italian cars at any price point have never been known for reliability or build quality and if you’re not careful they will rust away right before your eyes. But in a car like the Delta HF Integrale, the days when everything works perfectly are that much more special.

It doesn’t matter what your dream car is, as long as it inspires something in you. Never meet your heroes? Fah! Anyone who approaches life with realistic expectations is often met with positive outcomes. There are shortcomings to owning any kind of car, new or old, dream or mundane. The question isn’t, “Can you live with your dream car?” It’s, “Why aren’t you in your dream car right now?” Okay, sometimes dream cars aren’t always the most attainable, but the MotorTrend App is always attainable, now more than ever because it’s only $3 a month, billed at $35.99 for the year. Hurry, the deal only lasts until June 30, 2021!