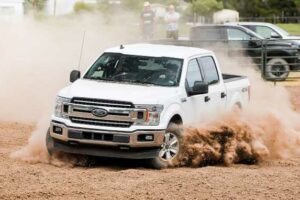 Every country has it’s national vehicle: Roadsters are quintessentially British, Italians have their exotic sports cars, the Japanese perfected the compact sedan, but America is all about the pickup truck. Americans buy more pickup trucks than anywhere else in the world, and the best-selling and most capable pickups are made right here. The Ford F-150, Chevy Silverado, and RAM 1500 have been the volume leaders in America for a considerable number of years, but which is the best out of the three? Performance and sales figures mean nothing to Top Gear America, though, so finding out which of these full-size pickup trucks comes out on top should be interesting.

Related: Sign up to the MotorTrend App today for a free trial, and see why Roadkill‘s David Freiburger loves classic Dodge D100s. Plus: Check out Texas Metal‘s show-truck builds and Dirt Every Day‘s Clampy, a trusty, crusty, and rusty Toyota Pickup on 1-ton axles that can crawl over anything!

When Dax Shepard, Rob Corddry, and Jethro Bovingdon get together for a vehicle shootout, you can be assured they aren’t going to be putting the pickup trucks (in this case) through the normal paces. How would one go about testing a pickup truck in the usual way? You can compare stats, pit them head to head in capability challenges, argue about prices and standard features, but regular readers of these stories know we don’t care about numbers and tangible concepts here. We’re all about the inarticulable feelings of owning and driving a vehicle, and there’s something about pickup trucks that we can’t help but fall in love with.

Why Are Pickup Trucks the Best-Selling Vehicles in America?

The Ford F-Series pickup trucks have been the best-selling vehicles in America for the last 40 years, and with nearly 1,000,000 moving off dealer lots worldwide in 2020, it doesn’t look like the F-150 (leader of the lineup) will be taking that crown off anytime soon. The Chevy Silverado isn’t far behind, either, and the RAM 1500 has been gaining market share almost exponentially over the last 10 years. The Ford and Chevy half-ton trucks have been the sales leaders in America seemingly since Chevrolet released their first pickup more than 100 years ago, but as little as 20 years ago, passenger cars still made up most vehicle sales in America.

In 2000, half of the top 10 vehicles sold in America were sedans. Of course, the top two slots were the Ford F-Series and Chevy Silverado, number three was the Ford Explorer, but the Toyota Camry, Honda Accord, and Ford Taurus handily outsold the other two pickups that made the top ten—the RAM (Dodge Ram, at the time) and Ford Ranger. Fast-forward 20 years, and trucks and SUVs have completely turned the tables. There’s still the F-150 and Silverado, holding strong at the top of the mountain. The RAM pickups stepped up their game with capability and features and are nipping at the heels of the other two, but we don’t see a passenger vehicle on the list until the number six slot—the Toyota Camry, ever a stalwart competitor, but losing market share every year—and only two other sedans make the list in the last two slots. Why?

Pickup trucks can do everything! In the simpler days of yore when there were, basically, only three kinds of car—pickup truck, sedan, and van—drivers had to sacrifice more than a little comfort to own a pickup truck. Noisy, bumpy, terrible fuel economy—pickup trucks were built to get the job done, and that’s it. Then consumers spoke up. People wanted more features, international trade agreements like the Chicken Tax muddled import laws, and vehicle manufacturers realized they could load up these volume sales leaders with the comfort and lifestyle features drivers love about passenger vehicles to sell more pickups at better profit margins than the sedans we used to buy for comfortable commuting.

Quiet and comfortable interiors nearly overloaded with standard features, smooth rides, more capability than ever before, and they’re even fuel efficient! The 2021 Ford F-150 is rated up to 26 mpg highway! As little as 10 years ago, a full-size pickup that could attain more than 18 mpg combined was a novelty, and now even the premium V-8 engine offerings are seeing 20 mpg. There just isn’t any compromise to owning a pickup truck anymore.

There are so many options available on modern pickup trucks that doing a proper three-vehicle shootout is nearly impossible. Jethro shows up in a 2020 Ford F-150 with the 2.7L Ecoboost twin-turbo V-6 and is the least powerful truck out of the three. Rob has the 5.7L Hemi making 395 hp and 410 lb-ft of torque in his RAM—there’s just no comparing the two. Dax is even worse: His Chevy Silverado 1500 has the Trail Boss package equipped, giving the Chevy an advantage over the more street-friendly-trimmed Ford and RAM trucks if the Top Gear America hosts were to do any sort of off-road comparisons.

Who are we kidding, of course they’re going off-road! They’re testing pickup trucks in Texas, their natural habitat where 20 percent of all pickups in America are sold. But none of that matters. Really, what serious pickup truck owner cares which of these three can make it around a barrel racing course the fastest or win in a tug-of-war? Is that even applicable to the modern truck enthusiast’s needs? Maybe to a select few, but it’s fun to watch. The Ford F-150, Chevy Silverado, and RAM 1500 are all so evenly matched when configured correctly, the only way to choose one over the other two is to go with your gut. That means the Chevy for Dax because he bleeds Bow Ties, the Ford for Jethro because that is the driver’s truck, and ever-eccentric Rob loves the RAM because it is the wild card of the three pickups. Which would you choose?